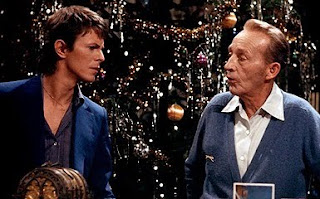 Peace on Earth, can it be? When David Bowie posed that musical question to Bing Crosby 33 years ago, a generation of young TV viewers watching in amazement asked another question: Did that really just happen? Was the Thin White Duke actually singing a heartfelt duet with the "White Christmas" dude? Those who saw Crosby's 1977 holiday special - or MTV's frequent airings of the video clip - still remember how unusual that moment seemed. The premise is that guest-star Bowie is stopping by the English manor where Crosby is staying. They share some corny dialogue - "'ello, you the new butler?" the rock star asks with perfect timing - before discussing yuletide traditions. Then they launch into the majestic "Little Drummer Boy," with Bowie quickly segueing into the sweet, soaring counterpoint of "Peace on Earth."

To understand the impact of this musical detente, you would have to imagine Lady Gaga singing with Andy Williams for a 2010 special - which actually doesn't sound that outlandish anymore. These days, there are plenty of successful culture clashes, like Tony Bennett's duets with Sting and Bono. But back then, Bowie's avant-garde rock style - his "Heroes" video was featured on the same special - was considered as far from Crosby's mainstream crooning as Pluto is from the sun. Having them perform together was a landmark instance of pop-culture worlds colliding. And it worked. In the years that followed, the weirdly beautiful moment - which aired not long after Crosby's death - became the stuff of legend, fondly remembered and, eventually, lovingly parodied by several very funny people.

During his "Daily Show" era in the 1990s, Craig Kilborn did a sarcastic version with Bob Mould, where it sounds like the former Husker Du front man asks Kilborn if he's "the new Bill Maher." Dave Foley of "Kids in the Hall" fame did a fantastic Bowie impression in a skit for his 2002 "The True Meaning of Christmas Specials" on CBC that cast Joe Flaherty as Crosby. It alters the lyrics about peace so that Bowie sings, "Where do the monsters go at Christmas?" And it ends with a nasty argument between the two where Crosby insists on mispronouncing Bowie's name and questions his masculinity. Recently, two parody versions from comedy all-stars debuted on the Web. In a takeoff that appears on CollegeHumor.com, Jason Segel and Jack Black sing the duet with nice sincerity as themselves, except they're animated characters who gather at a rustic log piano and float briefly through a sunlit sky.

In the other, done for FunnyorDie.com, Will Ferrell is Bowie and John C. Reilly is Crosby in an elaborate, virtual word-for-word re-creation of the original. It's almost exactly like the real thing, from the clothing and set to the goofy script. "You're the one that sings, right?" Ferrell asks, just as Bowie did. "Well, right or wrong, I sing either way," says Reilly, relishing the pun. But there is a new ending - some bleeped expletives are exchanged between Ferrell and Reilly when Bowie corrects Crosby for getting his name wrong. In the 1977 special, there was no fighting. Peace on Earth - or at least on television - was achieved.

The Bowie-Crosby summit wasn't as big as the Beatles appearing on "The Ed Sullivan Show," but maybe it was a turning point of sorts. These days, celebrities from different genres frequently bridge the generation gap. Betty White gives Jon Hamm dance lessons in an Emmy skit. William Shatner works with Ben Folds on an album. John McCain and Snooki are Twitter pals. And they have Bowie and Crosby to thank, in a small way. At least, I hope that is right. Right or wrong, their duet is still making people jolly during the holidays.

SOURCE
Posted by David Lobosco at 5:49 AM