BING AND RETURN TO PARADISE ISLANDS 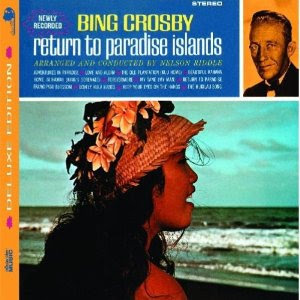 Return To Paradise Islands is one of six Bing new releases which gathers long lost and unreleased material, cleans and polishes it, and issues it in CD form for old and new fans alike.

Bing Crosby influenced a generation of pre rock ‘n’ roll crooners and it can be argued a number after that point as well. His style and popularity set him apart from his peers as his easygoing vocals enabled him to sell nearly one billion records worldwide in addition to a distinguished acting career.

He had a history of recording songs from the Island of Hawaii. Beginning in 1936 he would record 40 sides of Hawaiian material. His most famous was his rendition of “Sweet Leilani,” from the film Waikiki Wedding, which won the 1937 Oscar for Best Song.

1963 found him signed to Frank Sinatra’s Reprise label. He entered the studio three times during the last half of 1963 and recorded the 12 tracks for what would become his 1964 release Return To Paradise Islands.He would be backed by arranger/orchestra leader Nelson Riddle who would provide a lush background for his vocals. The vinyl release quickly disappeared and has never been re-issued in CD form. It now returns in a new stereo mix with five bonus songs added for good measure.

It is the slower tempo material which really shines. “The Old Plantation” and “Forevermore” are effortless. His cover of “Adventures In Paradise,” which was taken from the television series of the same name, is equally relaxed.

Whether it’s the indigenous songs such as “The Hukilau Song” and "Lovely Hula Hands” or the lighter “Keep Your Eyes On Your Hands” or “Home In Hawaii,” it is a smoothly flowing affair from a musical era long gone.

Five of the bonus tracks are taken from radio appearances and are very simple as he is backed by Buddy Cole and His Trio who were very different from The Nelson Riddle Orchestra. “My Little Grass Shack,” “The Cockeyed Mayor Of Kaunakakai,” “Yaaka Hula Hickey Dula,” “Ukulele Lady,” and “King’s Serenade” feature Bing’s voice with only minimal keyboards, guitar, bass, and drums in support. It all adds up to a nice counterpoint to the main body of the album. 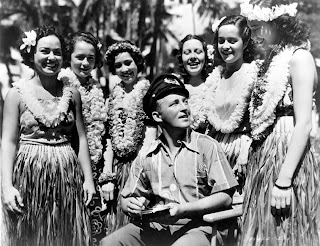 The re-release of Return To Paradise Islands is another link in the reintroduction of the Bing Crosby catalogue to the 21st century. It may not be rock ‘n’ roll but it does find one of the mid-20th century masters at the height of his powers.

SOURCE
Posted by David Lobosco at 7:54 AM