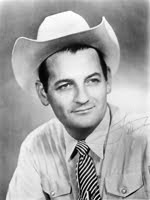 Not a whole lot of Bing in this story, but it is interesting that Bing had a connection with even forgotten country singers...


Newswise — The late and legendary musician Bob Wills is the King of Western Swing — which Texas lawmakers this week declared Texas’ official music — but it’s time to pay homage to a lesser known fellow who helped Wills ascend to the throne, says a Baylor University researcher.

“You ask anybody, ‘Ever heard of Tommy Duncan?’ and you get dead silence,” said Curtis Callaway, a lecturer in journalism and media arts at Baylor. “You ask, `Ever heard of Bob Wills and the Texas Playboys?’ Immediately everyone raises their hands with excitement. I’ve done this in a room of 150 people. Well, who do you think was singing? Tommy Duncan was one of the best vocalists of the time.”

Callaway and half a dozen Baylor students are researching singer-songwriter Duncan of the band Bob Wills and his Texas Playboys for a documentary In the Shadow of the King — The Tommy Duncan Story. They are shooting videos of interviews with Duncan’s family, the founder of his fan club and musicians that played with him. The film, marking the 100th anniversary of Duncan’s birth, will include footage of the singer’s performances. He was born in Whitney, Texas, on Jan. 11, 1911.

None of this is to minimize singer-songwriter-showman Wills, Callaway said, lauding him as “an entertainer who knew the business and was a genius at it. He played the fiddle, he was the band leader, he was the marketer.”

Wills, with his high-pitched voice, perpetually chimed in with “AW, yeah,” “Ah-HAH,” and “Come in, Tommy,” but Duncan was the singer on virtually all the hits, Callaway said.

While Duncan is known among musicians rather than the public, his influence is felt as far away as Scotland. There, a band of his fans called Stretch Dawson and the Mending Hearts performs western swing, complete with bagpipes, Callaway said.

Western swing is a form of country that originated in the 1920s and 1930s, with an up-tempo dance sound incorporating jazz and sometimes ragtime, blues, zydeco — even gospel. Among Bob Wills’ hits were San Antonio Rose, Faded Love, Roly Poly and Bubbles in My Beer.

“Bing Crosby was a big fan of Tommy Duncan’s, and they were friends,” Callaway said. “They even had their horses stalled next to each other. They rode together and went to the races together.” 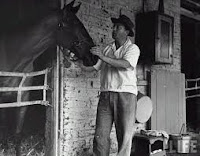 Duncan died in 1967 in a motel room in San Diego after a performance. The coroner’s report said he had a heart condition, and pills for the heart were found in the room.
Callaway, who has been financing the music project himself, said he hopes to obtain a grant or private funding. He has several photo albums of Duncan. Pam Townley of Whitney, founder of Tommy Duncan Fan Club, is lending him Duncan’s hat, boot, spurs and records that may not have been heard before.

Wills and Duncan “had their differences, and it was devastating when they broke up,” Callaway said. “Together, they were perfect. But Tommy Duncan never got the credit, and it’s time he did.”

SOURCE
Posted by David Lobosco at 6:05 AM