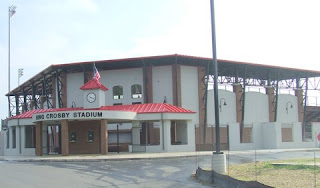 Front Royal has long been known as a baseball town. But until 1950, it provided no formal playing field for its favorite spectator sport. The fifty acres, along Happy Creek, was purchased at $250 an acre.

The Front Royal - Warren County Recreation Association undertook the project of raising funds to develop the stadium. Besides playing fields, the stadium needed a wall, bleachers, dugouts and lighting.

A goal of $10,000 was set for accomplishing all that needed to be done. Local citizens and businesses were invited to purchase bonds in denominations of $10 per bond to finance the project. Fund raising projects were undertaken.

A break for the community and its fund raising efforts came in the spring of 1949, the year Bing Crosby was grand marshal of the Apple Blossom Festival in Winchester, Va. Raymond R. Guest, Sr., a personal friend of the late entertainer, prevailed upon him to make an appearance in Front Royal on behalf of the recreation association.

Mr. Crosby appeared before a sell-out crowd in Warren County High School and during the ensuing year, plans were made for a Bing Crosby Day celebration to benefit the recreation association. Bing Crosby Day, April 1, 1950, drew crowds from everywhere, as Mr. Crosby entertained and captivated the huge audience with his expert blending of friendliness and informality. Highlight of the evening was his rendition of "I feel like I'm on my own soil, when I'm down in Old Front Royal," his own version of "Dear Hearts and Gentle People".

A grateful community named its new stadium in honor of a nationally known Hollywood figure that had taken time and given money to forward one of its dreams.

SOURCE
Posted by David Lobosco at 5:25 AM