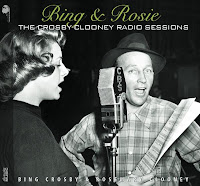 Fans of Der Bingle are following some disheartening news. With the switch of management at Collectors Choice Music, many of the Bing issues that they co-produced are being discontinued. While a lot of great Bing material has been released in the past two years, Bing fans have witnessed the closing of Redmond Nostalgia and other smaller outlets that specialized in rare Bing material. This quick disappearance of many Bing CDs is yet another blow to Bing Crosby fans.

Richard Baker, famed Bing discographer and moderator of THE CROSBY FAN WORLD had this to say about suddenly hard-to-find CDs:

"I've had a couple of e-mails which indicate that Bing & Rosie: The Crosby-Clooney Radio Sessions (2-CD set) is proving hard to get. I've done a browse around of my own and I cannot find it in the Collector's Choice on-line listing, and both Amazon US and UK are out of stock, though they both give their standard indication about notification when they obtain new stocks. The Amazon sites seem to show very low stocks of some of the other CCM issues with the Seasons CD being shown as having a very long delivery delay by Amazon US and only one currently in stock at Amazon UK, whilst I cannot find it on the CC website at all, so that even the long delivery quoted by Amazon might be optimistic.

One contact has told me me that he has had a notification from CCM verifying that The Crosby-Clooney Radio Sessions has been discontinued but also adding that if it becomes available again it will be found in their catalog(!!!). I cannot find much reassurance in that.

Presumably the remaining issues might await the same fate, so for those who have not already got the CDs I suggest you get buying such of them as you can find.

The only reassurance seems to be that some (all?) are now available from iTunes as downloads.

A desperate shame. The future was looking good. After the strong flow of new issues through 2010 we have had an ominous silence, only partly broken by the two exclusive downloads from iTunes." 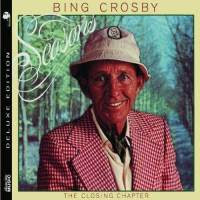 I have done my own investigation, and the Bing Crosby-Rosemary Clooney CD "Radio Sessions" has been discontinued or on back order with every outlet I could find from Best Buy and Borders to Deep Discount, World Records, and Amazon. Whoever was lucky enough (or smart enough) to buy a copy may have a collector's item on their hands.

However, like Richard said it is a desperate shame. The CDs are well produced and are introducing a whole new audience to Bing Crosby. Hopefully, a new producer will step up to replace CCM. If any news comes out, I will post it on here...
Posted by David Lobosco at 8:32 AM