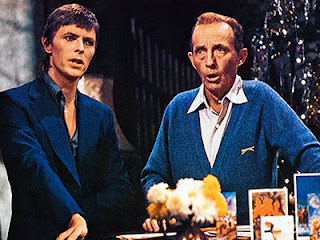 It was in September of 1977 that Bing Crosby began filming what would be his last Christmas special. Bing, whose recording of “White Christmas” was, and still is, the best selling record of all time, had become a sort of symbol of Christmas and his yearly Christmas TV specials were always a big favorite.

As was the custom back then, stars like Bing Crosby or Andy Williams would always include a contemporary artist as one of the special guest. Exactly how that year’s special guest came to be David Bowie is a mystery. Someone in Crosby’s stable must have thought it would be a unique idea to have Bowie teamed with Bing.

The duet between host and guest star was a standard in those days. The problem was, that Bowie didn’t like the song, “Little Drummer Boy.” So, plan “B” went into action and thus was born a very famous duet.

When Bowie announced he didn’t really want to sing “Little Drummer Boy”, production on the filming of the special went into emergency mode. The task of writing something Bowie might like fell to composers Ian Fraser, Larry Grossman and Alan Kohan.

Legend has it that the trio of composers went to the NBC studio piano and wrote the song “Peace on Earth”, to be sung as a counter-point melody with “Little Drummer Boy.” They played the song for Bowie who gave it his approval and one hour later the cameras rolled and history, of a sort, was made.

The response to the duet was fantastic. A bootleg copy of the performance made it’s way to radio and the song has been played annually since then.

I’ve heard that Bing enjoyed the duet with Bowie. Many people have wondered if Bing Crosby was even aware of Bowie as a performer. One insider told an interviewer that Crosby was still up on music and no doubt knew who Bowie was even if he learned from his kids.

Kind of sad to say that Bing never got to see this Christmas Special. One month after the show was filmed, Bing Crosby died of a heart attack on a golf course in Spain...

SOURCE
Posted by David Lobosco at 6:23 AM