Here is yet another great reflection on Bing's career. No one like Steve Fay can weave his words around in such an interesting and thought provoking manor... 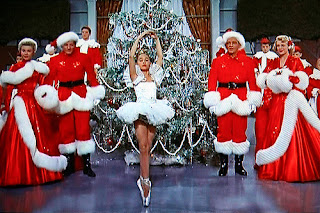 Not having cable or satellite TV, I have gotten more and more used to movies becoming a rarity on American broadcast TV, and consequently I expect to see fewer older movies on the stations I get. With the holiday season, a few Christmas-related movies have been showing so far, but they are either ones from the last 10-15 years or they are cartoon features. It's not like the old days when two or three stations would repeat each of the major Christmas movies from the 1940s & 50s. To watch those, we have resort to our tapes and DVDs. So this past Saturday night became "White Christmas" night at our house.

There are probably not many films I have watched as many times as "White Christmas," so obviously all of the scenes and songs are intensely familiar, yet I still get choked up at the end when the stage backdrop rises to show the snow falling, and in those moments when Rosie's and Bing's characters fall back in love. The drama of the old general and his former troops' devotion to him still affects me, too. Then there are the seasonal songs, and not just the title song, but also "Snow" which still deserves more radio play than I ever think it got. 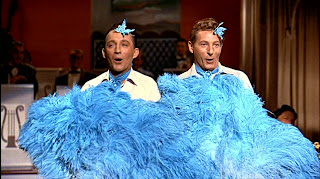 But there are also occasionally new or surprisingly-deepening impressions that come along in these later viewings. One particularly strong one is how great Danny Kaye's singing and dancing are in the song: "The Best Things Happen While You're Dancing." The effortlessly-looking high spins around those posts are quite amazing. Another thing that stood out for me Saturday was just how good Rosemary Clooney was, not just her great singing, but how convincing she was with all of the attitudes and emotional states her character travels through. And then how she is entirely lovely in the scene that included the "Count Your Blessings." What a shame that she and Bing didn't do another movie together.

Another impression came through to me more than in the past, too, and that was about Bing's own dancing ability. While he certainly could have been upstaged by co-stars like Astaire, O'Connor, or Kaye, Bing always seemed to hold his own in dance scenes with their lot. He might not look like he could be as light on his feet as they were, but he matched them step for step, unless he didn't for comic effect. While it rarely seems to get mentioned, Bing Crosby is quite a competent hoofer! I wonder what kind of effort went into keeping him on his toes so well. 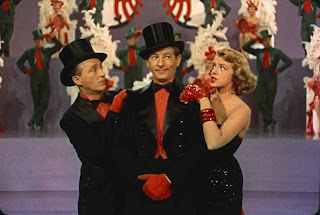 A cultural issue also came to mind in my watching this time, about how different the impression of the US military was in post-WWII films like "White Christmas." Then the US had a 'civilian' army. The great majority signing up or drafted for that War, assuming they survived, were only there on temporary assignment from their lives at home. Some of their sloppiness or unruliness, joked about in this movie, comes from their not being career soldiers like General Waverly, who managed a great deal of tolerance toward them in leading them. But now, after decades of a 'professional' all-volunteer army, in which troops serve many enlistments, even several tours of duty in wars longer than WWII, I wonder whether today's soldiers are as able to identify with that image of WWII soldiers, even as much as Vietnam era soldiers were able to do?

In any case, "White Christmas" seems to offer more to appreciate and to ponder... 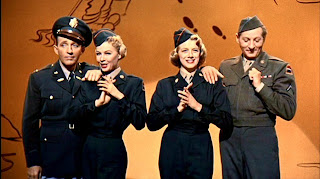