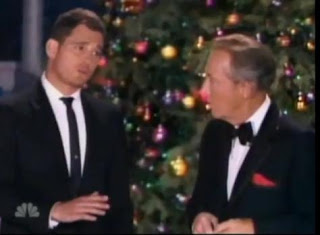 Michael Buble may have had the best-selling festive album last year  but it's Bing Crosby's music his family plays to get into the Christmas spirit.
The Canadian crooner topped the festive charts at the end of 2011 with his holiday compilation Christmas, and the release continues to dominate the yule gift market this year but the singer admits his mum Amber would rather listen to the classics.

He tells Britain's Daybreak talk show, "There's one record in the house and that's Bing Crosby's Christmas record. You know, I try to force a little Elvis Presley on them but it's pretty much my mother - it's all about Bing and that is a tradition we've had since we were kids. It was always playing. I mean, come July, I loved Christmas music so much that I think I was still singing, 'It's Christmas in Killarney, it's wonderful to see...

Posted by David Lobosco at 7:44 AM