LORETTA HUNT AND HER CONNECTION TO BING

Even the most mundane of connections to the great Bing Crosby is news worthy, even in 2015. Here is an obit from last month... 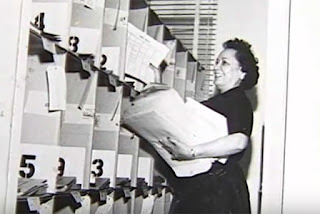 Former longtime Clark County Clerk Loretta Bowman Hunt, whose work led to an appearance on the television program “What’s My Line?” has died at age 96.
Her career spanned a half-century, covering an era when Las Vegas marriages enjoyed growing national popularity. Hunt died Friday at her home, 68 years after she started as deputy county clerk in 1947.
The civil servants — then, as now — sometimes rub elbows with the rich and famous who come to Las Vegas to get married. Hunt signed and issued a marriage certificate in 1957 to crooner Bing Crosby and his bride, Kathryn Grant.
That bit of paperwork led to her making an appearance on the CBS show where a group of panelists asked guests questions in an effort to learn their occupation and career highlights.
“Loretta was an institution in Clark County,” County Manager Don Burnette said in a prepared statement. “She was an important and influential member of the criminal justice community in Southern Nevada for many years.”
According to a county documentary feature on Hunt’s life, she didn’t “stump” the panel of experts, but still received $50 in prize money.
A newspaper clipping about her TV appearance said she “brought invaluable publicity to Las Vegas.”
Hunt was appointed county clerk in 1965 to fill a vacancy, and she went on to serve eight four-year terms before her 1999 retirement when she was 79.
She was born Loretta Bowman on Feb. 10, 1919, according to her obituary, the daughter of Elmer and Elizabeth Bowman, and married James Charles Hunt after retiring.
Issuing nuptials to Crosby was just one accomplishment.
Hunt was president from 1977 to 1978 of the National National Association of County Recorders, Election Officials and Clerks.
By BEN BOTKINLAS VEGAS REVIEW-JOURNAL
SOURCE
Posted by David Lobosco at 7:38 AM