GUEST REVIEWER: TOO MUCH HARMONY 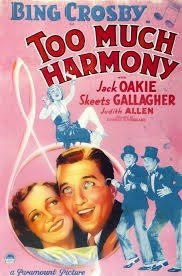 Bing Crosby guru Bruce Kogan is back for another guest review of a Bing Crosby film. This time around he is reviewing the rare early Crosby film - Too Much Harmony from 1933...

This was Bing Crosby's third feature film on his new Paramount contract and by now Paramount discovered that they didn't have to put much production values into his films. Just give Bing some good songs to sing and the picture sells itself.

That was definitely the case here. Crosby was supplied with a nice score by Arthur Johnston and Sam Coslow that contained two of his early film hits, Thanks and The Day You Came Along. For Crosby fans that's enough recommendation right there.

However what makes the film sad is that this is a backstage story with enough opportunities to do some really nice production numbers. When you consider what Busby Berkeley was doing at Warner Brothers at the same time Paramount was making Too Much Harmony, this film comes off much the worse by comparison to any of Berkeley's work.

They gave Bing a nice supporting cast with Jack Oakie, Skeets Gallagher, Ned Sparks and Harry Green. Bing is caught between two girls in this one Judith Allen and Lilyan Tashman. Lilyan is the bad girl and gold digger that she is, you kind of wonder why Bing is bothering with good girl Judith Allen. 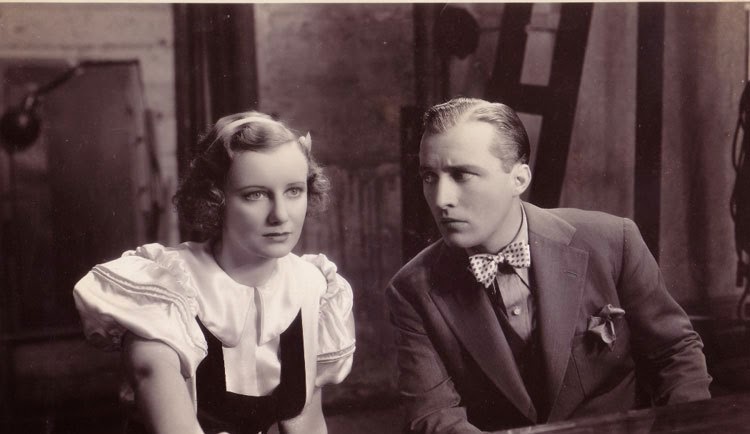 Judith Allen, I understand was the current inamorata of one of the Paramount studio bigwigs and he foisted her on this film. She's so bad she makes Ruby Keeler look talented. Her singing was as bad as Ruby and her acting was insipid. She didn't last long at Paramount, she was doing B westerns at Republic with Gene Autry by the end of the decade and dropped out of sight after that.

My favorite number in this takes place in a train boxcar where Bing, Ms. Allen and the rest of the cast gradually join in as Bing kids his image by singing All the World is Singing Buh boo boo boo. It has that very impromptu look that a lot of Crosby's best movie numbers have. Too bad he didn't make a record of it.

He did however make a record of another song from the film that he didn't sing in Too Much Harmony. An actress named Kiity Kelly does a lovely torch number called Black Moonlight. However Crosby did record it for Brunswick records like the other two numbers mentioned and it did enjoy a good sale considering this was Depression America. He always liked it and said so on his Musical Autobiography for Decca that came out a generation later. He said he hoped some of the newer generation of singers revived it. No one else has ever sang it to my knowledge... 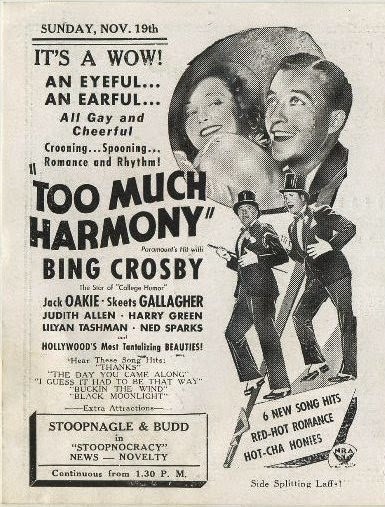 Posted by David Lobosco at 7:12 AM