GUEST REVIEWER: RHYTHM ON THE RANGE 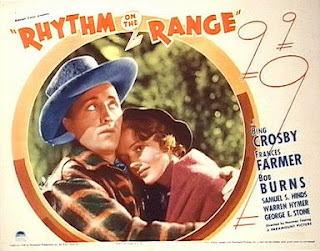 Our guest reviewer Bruce Kogan is back for another insightful review of one of Bing Crosby's films. This time around he reviews Bing's only "western", RHYTHM ON THE RANGE (1936).

Another source of recording material for Bing Crosby were western songs. He recorded a good many of them in his career. About the time Rhythm on the Range was being made the singing cowboy was just getting started as a movie staple. When Bing's 78s were being compiled into vinyl albums in the 1950s he had recorded enough for several albums. Lots of the songs of Gene Autry and Roy Rogers are in the Crosby catalog in fact a young Roy Rogers can be spotted in the I'm An Old Cowhand number.

Runaway heiresses were another movie staple especially in the 1930s and that's Frances Farmer's part. She's running away from a marriage she's not terribly thrilled about and stowing away on a freight boxcar she finds Bing Crosby who unbeknownst to her works as a ranchhand on her aunt's Frying Pan Ranch out in Arizona. Bing is nursemaiding a bull named Cuddles and Bing, Frances and Cuddles make their way west with several adventures. Trailing them are a trio of hoboes played very well by James Burke, Warren Hymer, and George E. Stone who have found out who Frances is and are looking to make a quick buck. Their machinations go for naught of course. In Frances Farmer's book, Will There Ever Be A Morning, she describes a not very happy life in Hollywood. However she liked this film, as it had no pretensions and similarly her leading man. She described Bing Crosby as a pleasant unassuming fellow who she liked, but didn't get to know real well. Frances had a best friend, a matron of honor to be, for the wedding that didn't come off. She was played by Martha Sleeper and I think a lot of her part was edited out. Sleeper gave some hints of a really juicy Eve Arden type character that could have been used more. 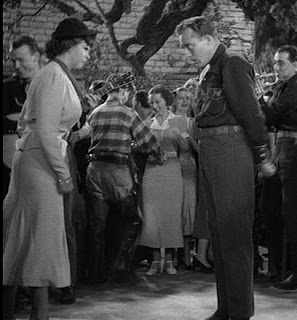 The second leads were played by Bob Burns and Martha Raye. Burns, the Arkansas Traveler and regular on Crosby's Kraft Music Hall, played his usual rustic type and in this film introduced his patented musical instrument, the bazooka. Made out of two gas pipes and a funnel, the bazooka was a kind of countrified bassoon. The army's anti-tank device in World War II looked something like it and it was named as such. Martha Raye made her debut in this film and would go on to do two other films with Crosby. She sings her famous Mr. Paganini number here and her bumptious character complement Burns quite nicely. Crosby sings A Cowboy's Lullaby to Cuddles trying to calm him down during the train ride and the famous Empty Saddles during a scene at the Madison Square Garden Rodeo. He gets a ballad entitled I Can't Escape From You to sing while on the road with Farmer.

The most famous song to come out of this film is I'm An Old Cowhand which was a big seller for him. It's an ensemble number with just about everyone in the cast participating including as I said before, Roy Rogers and also a young Louis Prima. Now there's an interesting combination. I'm An Old Cowhand was written with words and music by Crosby's good friend and sometime singing partner Johnny Mercer. IT's a good film and I'm surprised Paramount didn't come up with any more Western type material for Bing considering he did a lot of recording of that material. The only other western type ballads he ever sung on the screen were The Funny Old Hills from Paris Honeymoon and When The Moon Comes Over Madison Square from Rhythm on the River. Crosby would have to wait until he essayed Thomas Mitchell's part in the remake of Stagecoach during the 1960s to be in another western. And there he sang no songs at all.

One song that was cut out from the film was a duet by Crosby and Farmer called The House Jack Built for Jill. Crosby did record it for Decca as a solo and it is heard towards the end of the film in background. I was lucky to get a bootleg recording from the cut soundtrack. Frances talk/sings a la Rex Harrison and Bing sings it in his inimitable style. I think this was supposed to be a finale and it was cut at the last minute. The film does end somewhat abruptly and you can tell there was more shot. Maybe one day it will be restored. Rhythm on the Range was remade by Paramount with Martin and Lewis as Pardners. Dean and Jerry are good, but it ain't a patch to the original. 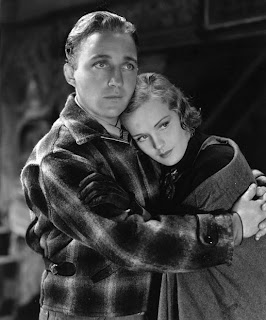