What do you give someone when you’ve already given them the greatest present they’ll ever know?

I ask because I lost a bet and have to pay off.

I didn’t really lose the bet myself as much as I lost it on behalf of all residents of Tacoma. If we had surpassed Spokane as the state’s second-most-populated city, I would be the one accepting the payoff.

But you all dropped the ball in the procreation department. As reported Wednesday by the U.S. Census, Spokane retains the silver medal as runner-up to the mutually resented Seattle. It wasn’t even close, with Spokane building a 10,519 human advantage after leading by just 2,073 in 2000.

I bet Doug Clark, a columnist for The Spokesman-Review of Spokane. I should say the columnist since Doug has been writing three columns a week since 1984.

It will be tough, because we’ve already given Spokane something so amazing, so life-changing, that anything else will seem like a Thomas the Tank Engine PEZ dispenser by comparison. 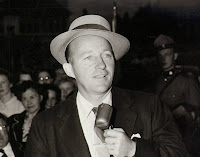 For those less than say, I don’t know, 50 years old, I may need to explain the phenomenon that was Bing. For four decades in mid-century, Bing was at the top of the recording industry, movies and television. All at the same time.

I tried to think of a modern equivalent and couldn’t. Good luck naming someone who has dominated just one of those entertainment fields in recent years? Look it up on Bing: Der Bingle was Der Kingle.

Sure, he was raised in Spokane, schooled there, began performing there. But he was born in Tacoma, and only those who buy into that whole nurture-over-nature rubbish could conclude his three years in Tacoma weren’t what made him great.

Crosby died in 1977, living just longer than Spokane did. Think though: Had he stayed in Tacoma, he might have really made something of himself.

Doug has more experience in this civic rivalry game than I do. A year ago after the state’s population estimate showed Spokane had extended its lead to 2,273 (after Tacoma had climbed to within 600 in 2005), he sent the Tacoma City Council some cool stuff, including an Expo ’74 Viewmaster along with a sympathy card.

“Dear Tacoma,” it read. “Eat my dust! Respectfully yours, Spokane.”

Councilman Marty Campbell responded with an all-Tacoma gift box, including what Doug thought was gourmet coffee until he opened it up for a full-on whiff.

So that’s out, because I doubt Doug’ll fall for it a second time (then again, he is from Spokane).

Give me some ideas. I will present them when he and I meet halfway for lunch (I have to buy) and an exchange of gifts. I’m not exactly sure what lies halfway between Spokane and Tacoma, but I’m told I’ll recognize it. It’s where prosperity and hope begin to wither.

That Spokane – the city – remains No. 2 is something of a demographic anomaly, because Spokane – the county – is far behind Pierce County. Way behind. Like 294,000 people behind and in fourth place behind Snohomish.

It seems Spokane staves off Tacoma’s spirited run at the booby prize of second city for two reasons. First, it annexes every suburban block with more than six people on it. Second, a much-higher percentage of people in their county live within the big-city limits – 44 percent compared to Tacoma’s 25 percent.

I used to wonder why. I stopped after visiting Spokane during December. Once the quite horrific and seemingly unending winter arrives, Spokanites huddle as close together as possible for warmth and mutual protection against wolves.

Only in the spring, long after the census has ended, do they venture outside the city limits and head to the lake.

Tacomans are a heartier people who don’t feel the need to cluster so tightly.

That, and we have central heating.

by PETER CALLAGHAN; STAFF WRITER
SOURCE
Posted by David Lobosco at 6:16 AM