One of the people that really cemented Bing Crosby's image as a superstar in the early 1930s was song writer Ralph Rainger. Rainger, under contract to Paramount as Bing was, wrote some of Bing's greatest movie hits of that time. Before I did research on Rainger's life, I did not know much about the man. other than the songs he wrote.

Ralph Rainger was born in New York City on October 7, 1900. Showing an early talent for composition, he won and accepted a scholarship to New York’s prestigious Damrosch Institute of Music, however, under pressure from his family for a more sensible career, Rainger dropped out after just a year and began working his way through Law School and graduated from Brown University Law School in the late 1920’s.

Throughout the years, however, he had studied with instructors such as Paolo Gallico, Clarence Adler and Arnold Schoenberg and shortly after his graduation from Brown, he decided to devote his life to music and began taking jobs as a professional pianist, arranger and accompanist for vaudeville entertainers.

In 1928, he formed a team with Edgar Fairchild and the two co-led an orchestra in the Broadway production, Cross My Heart. However, it wasn’t until 1929 in the revue The Little Show, starring Clifton Webb, that Rainger had his first commercial success with the song “Moanin’ Low”. Webb had gotten Ralph the job as pianist in the pit orchestra and during one of the rehearsals they felt that a song was needed. Rainger, with a lyric by Howard Dietz, provided “Moanin’ Low”.

In 1930, Rainger had another hit song featured in the Broadway revue Tattle Tales, entitled “I'll Take an Option on You”, which had a lyric by Leo Robin. This was the beginning of a great Robin and Rainger team.

Teaming up with Leo Robin at Paramount, the duo wrote major Bing hits such as: "Love In Bloom","June In January","Blue Hawaii","I Wished On The Moon" and "Empty Saddles". The last Bing movie that they wrote for was WAIKIKI WEDDING (1937). 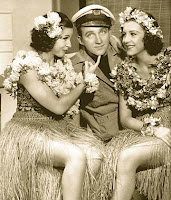 On Oct. 23, 1942, Rainger boarded an American Airlines DC-3 at the Burbank airport. He was headed to New York for a meeting with a sheet-music publisher. Robin had gone ahead by train. The night before, the airliner's co-pilot, Louis Reppert, had encountered a flight-school buddy, Army Lt. William Wilson, at a café in Long Beach. Wilson was to pilot a military B-34 bomber to Dallas two days later. In court-martial testimony, Wilson's own co-pilot, Staff Sgt. Robert R. Leight, testified that Wilson decided to leave a day early and told him, "One reason I want to take off today instead of tomorrow is that I know the co-pilot of an airliner and I want to thumb my nose at him."

Wilson did not file a changed flight plan. The pilot of the passenger plane, Charles F. Pedley, evidently knew nothing of Reppert and Wilson's rendezvous plans.

The next morning over Palm Springs, Wilson wiggled the B-34's wings in the vicinity of the DC-3. Getting no response, he moved closer and made another pass. His bomber struck the airliner, knocking off three-quarters of its rudder. The commercial plane spiraled to the desert floor, bounced, crashed again and exploded. Its crew of three and its nine passengers, including Rainger, were killed. The B-34 landed safely.

Rainger's wife, Betty, collapsed when she got the news of her husband's death. Until she died in 1973, she kept her memories of him to herself. Her older daughter, Connie, said years later, "Mom never spoke of him or played his music." Rainger's son was age 8 and his two girls were just 1 and 5 when he died -- they grew up knowing little about their father.

Lt. Wilson, the pilot of the B-34, was charged with manslaughter. The Army court-martial panel exonerated him.

Histories of American popular music have given Rainger short shrift. The man behind some of our most enduring songs deserves better. 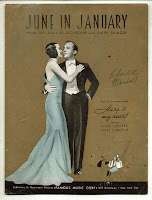 Posted by David Lobosco at 5:49 AM