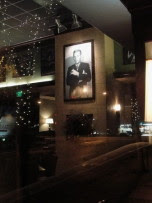 Diablo magazine is reporting that something called a "gastropub" and a Parisian-style bakery chain will share the space south of Broadway Plaza that formerly housed ﻿Bing Crosby's Restaurant and Piano Lounge.

According to writer Ethan Fletcher, the Mill Valley-based Moana Hotel & Restaurant Group, which owns nine Piatti restaurants (including the one in Danville), will bring that gastropub concept to the former Bing Crosby's space.

Bing Crosby's closed suddenly at the end of last year.

The other half of the building will go to San Francisco-based La Boulange, which has also opened new locations in Lafayette and Danville.

So, what is a gastropub. Spokesperson Jennifer Tomaro told Diablo that the new restaurant will focus on serving "cult, local and craft beers on tap," as well as wine on tap. The food will be pub and brasserie-style, though Tomaro was quick to say that they won't be opening a sports bar. "There won't be any televisions," Tomaro told Fletcher.

Another specialty beer joint in Walnut Creek? Yet, another cuisine trend after Vietnamese food and frozen yogurt joints?

Chuck Stilphen, a co-owner of the popular Trappist Belgian-style beer café in Oakland, has proposed opening a shop, tentatively called St. Sixtus Specialty Beer Shop and Cafe, that would sell 300 to 500 varieties of specialty beer. The shop would open in a remodeled Giammona Drive space that housed an antique store.

When Bing Crosby's opened in 2004, it made a big splash on the East Bay dining scene. Jeff Dudum, a locally raised entertainment and real estate impresario, opened the retro bar and restaurant that paid homage to singer and actor Bing Crosby and all he supposedly represented in terms of style and mid-20th century cool.

As Walnut Creek last reported, the restaurant's owner, Dudum Sports and Entertainment, is facing a stack of lawsuits and had to close some of its other signature restaurants, including Joe DiMaggio’s Chophouse, named for the famed New York Yankees slugger, in San Francisco's North Beach.

SOURCE
Posted by David Lobosco at 5:35 AM