On May 3, 2011 the 108th birthday of Bing Crosby will be celebrated with "Classic Movies at the Bing." The celebration is put on by the Advocates for The Bing Crosby Theater. The great theater is located at the corner of Sprague and Lincoln in Spokane, Washington. (I sometimes hate being an Easterner!) A $5 donation is suggested with all proceeds go to supporting future movies: 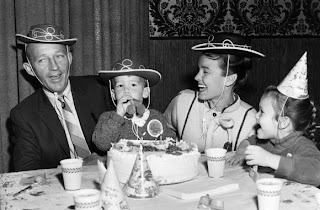 -Free cake and punch starting at 6 p.m.
-Assortment of Bing Crosby short features on the screen.
-Feature starts at 7 p.m.

The Country Girl was unlike any movie Bing Crosby had made before -- a serious study of a man in crisis. For his performance as an alcoholic actor wilting under the pressure of trying to re-establish his career, Bing was nominated for an Oscar. His character is bolstered by a devoted wife with the strengths he does not have. Grace Kelly -- also playing counter-type as a doughty housewife -- won the Oscar for Best Actress for her performance. She finds in William Holden the strengths Bing’s character does not have. Who wins her?

SOURCE
Posted by David Lobosco at 6:02 AM