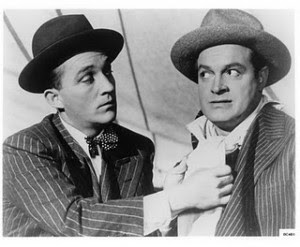 There are some stars that earn the adjective "beloved." Either for their professional or personal contributions, or both, they are adopted by the audience and become a part of the "family." Bob Hope and Bing Crosby, separately, were two such stars.

Bob Hope was everywhere. He was a radio star, a movie star and a television star. Audiences from the 1930s through the 1990s (the decade his last television special aired) knew him and loved him. He was the host of Academy Awards shows before Carson and his dedication to the entertainment of American service men and women is legendary. Most people over 50 can't remember a time when he was not, in some way, a part of their lives.

Hope also had a very successful film career. He was the unashamed coward who just happened to be frightfully funny and sort of lovable (in a sneaky kind of way). He was best with a knowing partner who had his number, such as Jane Russell in The Paleface and Son of Paleface. Bob always wanted the pretty girl, but it was ever an uphill battle for him. The last thing he needed was competition from another man, especially a romantic crooner who had his number ever better than the woman.

It is impossible to imagine any star today having the multi-media success that Bing Crosby enjoyed in his long career. A wildly successful recording artist and radio star, he was also a mega movie star. From 1934 - 1954 he was in the top 10 box-office champions 15 times, coming in at number 1 for five of those years. Famous for his laid-back style, he was more than just a lazy crooner. His personality was casual and comfortable, but there was an edge to him. He was not above doing something a little underhanded to get that leading lady at the end of the film.

On his own Bing was a successful film actor, with such classics as Going My Way, Holiday Inn, The Country Girl, and so many more in his impressive repertoire. Like many singers, he was a very good actor. Light comedy was cake to him and he could also handle the heavier dramatic stuff with his customary ease. But it took the hook up with a wise-cracking golf buddy to create one of the most successful comedy teams in movie history. 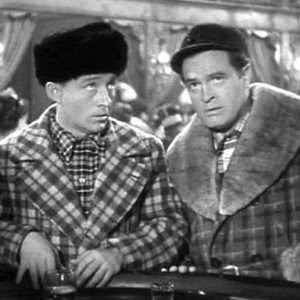 Bob Hope and Bing Crosby were great friends in real life. When Paramount decided to cast them in a 1940 film called Road To Singapore, originally slated to star Fred MacMurray and Jack Oakie, the magic of their personal friendship came to life on the screen and spawned a series of "Road" pictures staring the two pals. The plots of all of the succeeding "Road" pictures were similar: Bing and Bob are con artists looking to cash in, with Bing being a slightly smarter bulb than Bob. Both are not above double crossing the other in order to get the money and the girl, trouble ensures, hilarity erupts and all is well at the end, with the boys narrowly escaping disaster. What makes these films so delicious is the seemingly add-libbed comments, the great drop-ins by other stars, lots of "inside" jokes, Hope's breaking of the fourth wall to address the audience, and the obvious affection the two stars have for one another. Both Hope and Crosby were very big stars at a time when those words meant something. They did not have to share the screen with anyone. Their fame and name above the title was more than enough to ensure a film's popularity. Yet there is Crosby, playing the straight man, and there is Hope, getting bested by his best friend almost every time (Hope did get the girl in Road to Rio and Road to Utopia).

Add Some Dorothy Lamour.....
Dorothy Lamour was a large part of the "Road" pictures' success. Not only was she beautiful and sexy, she was the perfect foil for those con men on the make. Her tolerance of their antics was endearing and her all-American exotica made their cut-throat competition for her charms understandable. The "Road" pictures were more than just tomfoolery. They also offered some very beautiful music. Crosby's romantic renditions of "But Beautiful" and "Moonlight Becomes You," and Dorothy's "Personality," gave the productions a first-class shimmer that made up for some of the plot silliness. It was all done in great, good fun. Bob and Bing at that moment in time were pure stardust. They cast a glow that can never be repeated. How wonderful of them to share such good times with us. Morocco, Singapore, Rio, Zanzibar, Utopia, Bali... if you're on the road with these boys, it can only lead to joy. 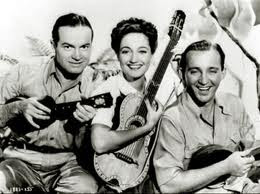 Are you smiling yet? I am, but there is also a little tug at my heart. Having grown up with them ever present in the entertainment world (and on my TV), I miss them. I just assumed they'd always be there. And they are, in a way, thanks to film...

Marsha Collock has been an avid fan - not scholar - of classic films since she saw the first flicker of black and white on the TV screen.

Check out her blog: A Person In The Dark

SOURCE
Posted by David Lobosco at 4:13 AM