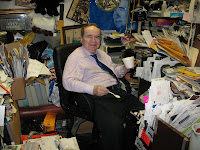 Often called "Mr. Nostalgia", broadcaster Joe Franklin (born 1926) is an authority on anything from the old days of entertainment. From New York City, Franklin is sometimes credited with hosting the first television talk show. The show began in 1951 on WJZ-TV (later WABC-TV) and moved to WOR-TV (later WWOR-TV) from 1962 to 1993.

Known as "the king of nostalgia" (he claims having invented the term), Franklin's highly-rated television and radio shows, especially a cult favorite to cable television viewers (WOR/WWOR was a superstation during the latter part of his tenure) and his long-running "Memory Lane" radio programs, focused on old-time show-business personalities. Franklin has an encyclopedic knowledge of the music, musicians and singers, the Broadway stage shows, the films and entertainment stars of the first half of the 20th Century.

Joe began his entertainment career at 16 as a record picker for Martin Block's popular "Make Believe Ballroom" radio program; he is an acknowledged authority on silent film; he has the largest private sheet music collection in the world; and he has counted among his friends many show business legends, from Tony Curtis (with whom he grew up) to old vaudevillians (on his television show, Franklin has described how as a very young boy playing in Central Park he even met George M. Cohan).

Joe Franklin is also a huge fan of Bing Crosby, and he had the crooner on his television show a few times in the 1970s. Luckily the interviews survived, because they are a great piece of entertainment nostalgia...

Posted by David Lobosco at 4:04 AM