GUEST REVIEWER: BIRTH OF THE BLUES 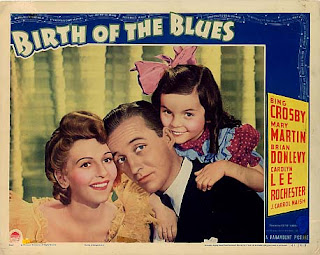 One of my favorite Bing Crosby musicals of the 1940s was BIRTH OF THE BLUES. It is a shame that the movie is so short on running time, but it is loaded with jazz! Guest reviewer Bruce Kogan is back to review it...

Birth of the Blues was a labor of love for Bing Crosby and it showed. Coming up with Paul Whiteman, Bing met and worked with some of the greatest musicians in history. He enjoyed their company, he enjoyed working with them, just couldn't get enough. The plot is a fictionalization of the creation of the first all white jazz combo, the Original Dixieland Band.

This is Mary Martin's second of two films she did with Crosby and at the same time this was being shot, she was doubling as the girl singer on his Kraft Music Hall. As in Rhythm on the River, for once he's given a leading lady who matches him vocally. Why movie audiences didn't take to her is still a mystery.

Brian Donlevy was at the height of his career where he usually played villains. He's no villain here, but he's Bing's rival for Mary Martin. He plays a hot cornet player named Memphis and I do love the scene where Crosby's band engages in an impromptu jam session on the street in front of the new Orleans Jail where Donlevy is residing and Crosby's trying to get him out. In a radio broadcast dramatization of this film, Phil Harris played Donlevy's part and Dinah Shore played the Mary Martin role. 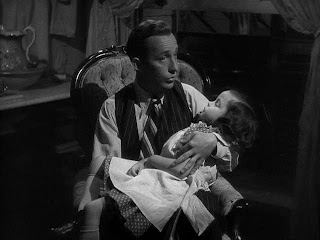 Usually Crosby's films have original material written for them, this is an exception. A whole lot of old standards are used, the only original song for Birth of the Blues is The Waiter and The Porter and The Upstairs Maid, written by Bing's good pal Johnny Mercer. It's nice, catchy, novelty number with the waiter and upstairs maid done by Crosby and Martin. The porter is jazz trombone great Jack Teagarden who's really into the spirit of the thing.

One of the standards is Wait Till The Sun Shines Nellie, this time done with a jazz inflection. Crosby and Martin duet it and it became a big seller Decca recording.

J. Carroll Naish plays a good gangster villain assisted by henchmen Horace McMahon and Warren Hymer. Hymer had a specialty in playing schlemiel henchmen and this is a typical Warren Hymer part.

Eddie Anderson is in the film, playing a Rochester like part for Bing Crosby as he did for Jack Benny. In many ways he played the typical servile black person and some would say he does it here. Personally I found his Rochester character very good, he often got the best of Jack Benny. He acquits himself well here.

Ruby Elzy plays Anderson's wife and she gets a good vocal opportunity to sing St. Louis Blues as Anderson is unconscious and the band thinks he's checking out.

No one should pass on an opportunity to see Bing and Mary Martin together! 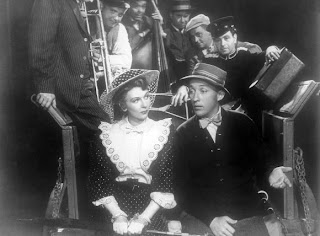