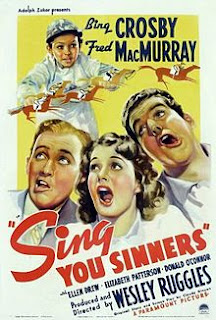 Bing Crosby guru Bruce Krogan is back for his usual excellent look at another Crosby film gem...

This is one of Bing Crosby's best films from the 1930s. It gave him a great opportunity to show off some dramatic ability and a couple of big selling hits one of which served as the title of the current biography by Gary Giddins.

Bing Crosby, Fred MacMurray and Donald O'Connor are the three Beebe brothers. And Bing is the source of much concern with mother Elizabeth Patterson. He's a lazy, shiftless, irresponsible and charming man who won't just settle down. The burden of supporting the family is left to brother Fred MacMurray who keeps postponing marriage to his long time sweetheart, Ellen Drew, until the family is all provided for. And finally kid brother Donald O'Connor idolizes Bing and wants to grow up just like him to the despair of Patterson and MacMurray.

Bing up and leaves the family, promising to go to Los Angeles, get into a steady business and settle down. Of course his idea of a steady business is to own a racehorse named Uncle Gus. He sends for Patterson and O'Connor and later MacMurray and Drew come and are all shocked.

The rest of the film is the usual run of movie plots where racehorses are concerned.

The Beebe brothers also have a singing act which MacMurray hates, but which brings in needed cash when the bills start piling up. That's where the musical score written by Jimmy Monaco and Johnny Burke comes in. Done as a trio number in the film, I've Got a Pocketful of Dreams became one of Crosby's biggest hits from the 1930s. Crosby's one solo number is Don't Let That Moon Get Away and in another trio number MacMurray is the lead singer in Laugh and Call It Love. Before he came to Hollywood, Fred MacMurray sang and played saxophone in various bands and also was in the original Broadway cast of Roberta. He had a pleasant, but thin tenor voice, but I don't think he'd have lasted in Hollywood if he had done musicals.

This was Donald O'Connor's first big break and he shows a hint of the dancing talent he had during the Pocketful of Dreams number. He and Crosby later re-united in the second version of Anything Goes in 1956. 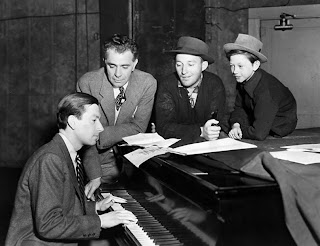 One song was added into the score. Composed by Hoagy Carmichael and Frank Loesser, Small Fry was done as a novelty number by the trio. However Bing recorded it with his good friend Johnny Mercer and that novelty song also became a monster hit.

Sing You Sinners should be seen back to back with the James Cagney/Pat O'Brien film The Irish in Us as they have very similar plot development and characters.

This was the first of two Crosby films with a racetrack background, the other being Riding High. Curiously enough they had opposite plot conclusions. No spoilers here though, see both films and see what I mean... 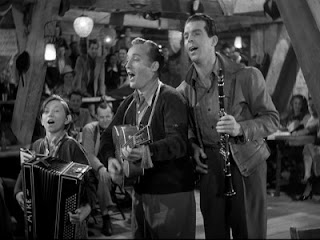