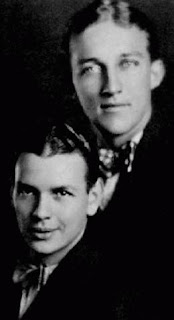 No one in the entertainment business has real "overnight" success. It takes months and years to work on your talent, and even longer to make it big. Bing Crosby was no exception. It was hard for Bing to make it big with his childhood friend Al Rinker, but in 1926 they gave it their all. While Crosby and Rinker were completing their contractual arrangement with Paramount Publix, Don Clark, a former Whiteman sideman whose orchestra was playing at the Biltmore Hotel in Los Angeles, asked them to cut a record with his musicians. Music historians have speculated that news of duo’s agreement with Whiteman may have been the primary reason Clark sought out their services. As a result, Al and Bing sang on two songs recorded October 18, 1926 in the grant ballroom of the Biltmore. One selection, "Don’t Somebody Need Somebody?" was never released. The other, "I’ve Got the Girl," composed by Walter Donaldson, perhaps best known for pop standards such as "My Blue Heaven" and "Carolina in the Morning," was issued by Columbia backed by the instrumental, "Idolizing."

The release proved to be something of an embarrassment. According to Bob Osborn and Vernon Wessley Taylor, whose comments appeared along with a limited-edition, 7-inch LP issued by the Bing Crosby Historical Society of Tacoma in 1980, Columbia apparently thought that the master cut of the record was slow. In an effort to achieve a jazzier sound, the recording was speeded up when duplicated were cut for release. Both Al and Bing would later admit that they sounded like a pair of chipmunks chattering in the background.

After a one-week engagement at Spokane’s Liberty Theater, from November 21 through November 27, accented by visits with family and friends, Crosby and Rinker headed to Chicago to meet up with Whiteman. Despite at least one awkward moment—a piano they were pushing offstage following their segment in one particular concert tipped over, requiring the combined efforts of Al, Bing, and Whiteman himself to get it back on its wheels as the audience roared with laughter—the duo continued to elicit a favorable response. During the three-theater run in Chicago, they had the opportunity to cut another record, "Wistful and Blue," recorded December 22, 1926 at the Concert Hall on Michigan Avenue. Whiteman also went out of his way to take them around town, introducing them to important people. Rinker would later recall, "Whiteman seemed to be quite proud of us. We were young and eager, and I think it was because we were fresh and very enthusiastic that he took more than a casual interest in us."

Crosby and Rinker’s success continued in the cities where Whiteman played enroute to the East Coast. Their New York City debut at the Paramount Theatre on Times Square in January 1927, however, brought them face-to-face with failure for the first time since they’d turned professional. By the time Whiteman opened his own club at 48th and Broadway in February 18, they had been reduced to performing during intermission; for most of the run they worked as stagehands. In 1980, Rinker offered the following explanation for their poor reception in the Big Apple:

"People didn’t seem to understand what we were doing! We’d go: bop-bop-de-do-do / de-doodle-eeaaaa [snapping his fingers while singing scat] and stuff like that. And they didn’t know what the hell we were doing! And now that I think about it, I don’t blame them. They were used to great entertainers of a certain tradition like Jolson, Cantor, and Sophie Tucker, who were belting out songs. [Imitating Jolson here] Mammmeee! Mammmeee! They really let you have it! But we were intimate. That wasn’t what they expected, and they didn’t like it"... 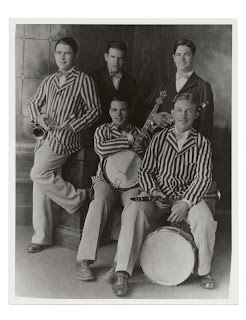