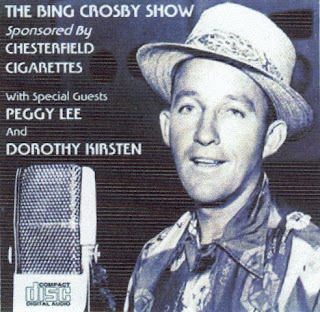 Mention the name of Larry Kiner to any avid Bing Crosby collector in the 1980s and 1990s, and he was a like a god to them. Larry specialized in rare radio broadcasts of Bing and other great stars of the day. With the closing of his company (Redmond Nostalgia) last year, I wanted to revisit what a great man he was...

Larry Kiner, Parlayed His Love Of Old-Time Music Into A Career
By Carole Beers


Larry Kiner knew something was wrong, seeing that stranger dash from a Georgetown bank. So, as if in an old radio show, Mr. Kiner followed the man's car, sticking with it until he could flag down police and finger the suspect.

The next year, 1970, Mr. Kiner created Redmond Nostalgia Co. - specializing in records of old-time radio shows and music - which he'd begun with the several-hundred-dollar reward he had received for helping nab the bank robber.

A letter of thanks from J. Edgar Hoover, then director of the FBI, was another reward, said Mr. Kiner's son Michael of Kirkland.

"He was really proud of that letter," said his son. "It was one of his prized possessions."

Born in Milwaukee, Mr. Kiner liked to play piano and loved music of the 1920s and 1930s. The tall, quiet boy began collecting records when he was 12. In 1934 the family moved to Seattle, where Mr. Kiner attended Broadview Elementary School, Seattle Prep and Lincoln High School. He switched high schools, according to his son David of Kirkland, "because he was trying to find a school with a good baseball team. He was a pitcher."

One of Mr. Kiner's daughters, Lt. Katherine Kiner of Fairchild Air Force Base near Spokane, said, "Dad also pitched one season with a semipro club in Bremerton around 1949." Mr. Kiner in later years would take his children to Seattle Pilots and Mariners games - and to spring training in Arizona.

After his family moved to Santa Monica, Calif., in 1950, Mr. Kiner finished school, then worked in electronic-parts engineering, production and sales. The family moved to Seattle in 1967. He ran some ads in a magazine and began selling tapes of radio shows.

Losing a job helped propel him into producing records of rare broadcasts by Al Jolson and Bing Crosby. He signed 100 aging stars in two years and had records pressed in California and Canada, selling to stores, distributors and mail-order clients.

His robbery reward helped buy equipment and records, a few of which had been made from live broadcasts in wartime. Mr. Kiner collected some 4,000 reels of tape with 40,000 radio shows. He got to travel, and to meet stars such as Rudy Vallee and Cliff Edwards, the voice of Disney's "Jiminy Cricket."


He wrote several books about the stars. He was working on a book about Bing Crosby. He also composed songs - "mostly like the old crooners used to sing," said his daughter. "He recently had played for a show featuring an Eastside dance group, `Tap Happy.' Music was his life."

She said Mr. Kiner, a "to-the-point kind of person" who had an old-fashioned sense of humor, was one of those lucky few who could turn a hobby into a career. His son David inherited the interest in old music . . . and the business. Other survivors include Mr. Kiner's son Steven and daughter Susan Lybyer of Kirkland, and seven grandchildren. Mr. Kiner's wife, Patricia, died in 1991. A memorial service was scheduled for 10 a.m. today at Northlake Unitarian Universalist Church, 308 Fourth Ave. S., Kirkland...

Posted by David Lobosco at 7:07 AM