BING AND THE QUEEN MARY 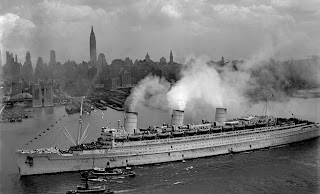 KadyCee submitted this vintage news story, originally reported by the Associated Press on Nov. 10, 1944, to the RMS Queen Mary blog reported this day in 1944:
HOLLYWOOD (AP)–Hollywood’s wandering minstrel, Bing Crosby, was home today after a four-months tour of England and the battlefronts of France.

Nothing El Bingo saw abroad touched him so deeply, he says, as the spectacle he witnessed as his troopship, the former Queen Mary, brought war-weary, wounded and spent young American soldiers to their native soil for the first time in three years.

“As we steamed into the upper bay of New York,” says Bing, “1,000 American soldiers, all of them casualties and many without hands, arms or legs, begged to be brought topside to the forward deck. These boys hungered for a sight of their homeland and the Statue of Liberty, the epitome of all they had been fighting for, all they had sacrificed.

“I cried unashamedly along with them as the Manhattan skyline came into view and we passed Bedloe’s Island where the Statue of Liberty stands. A fellow from San Diego who had lost both legs was by me as we sailed by. ‘She’s a great old girl,’ he mumured [sic] in a choked voice. ‘She was worth every bit of it.’”

Crosby left New York July 24 at the head of a USO Camp Shows unit and travelled 19,000 miles, oftentimes being within 100 yards of the front lines in France, Belgium and Holland... 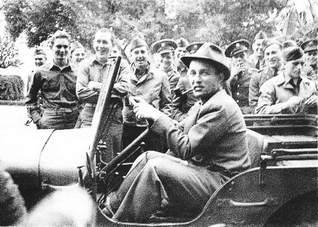