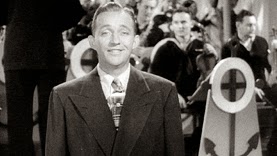 From Michael Feinstein:
"In 1978 while doing research for Ira Gershwin on the RKO films for which the Gershwins had written scores, I stumbled upon a box of old lacquer disks in the RKO Warehouse. I asked the curator Jon Hall about them, and he told me that he was unaware of any such disks in the collection. It was a jumble of files and papers and not well organized. He told me that they had no interest in the recordings and had no desire to keep them. Rather than see them destroyed, I offered to make a tape transfer of the disks if he would give me the originals. Jon was happy to clear out some of the detritus in the warehouse and I departed with a hodgepodge of film-related disks from the 1940s. Some were audition records of film hopefuls, some were orchestral cues, and there were also two 12" glass base lacquer disks of Bing Crosby, one cracked beyond repair and the other not only playable but in miraculously good shape for its fragility. It had no label and simply said "Crosby- fluff" in grease pencil. Upon playing the side I was delighted by the rich sound of Crosby's voice–and also the comment he makes at the end. In The Bells Of Saint Mary's he plays a pious man of the cloth. I wonder if he was wearing a priest's collar when he made this record?"

SOURCE
Posted by David Lobosco at 5:03 AM

Labels: In The Land Of Beginning Again, Michael Feinstein