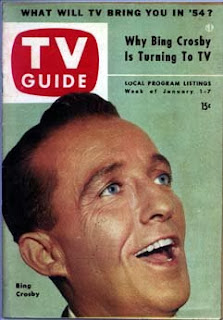 Here is an interesting article on Bing from Life Magazine Jan. 11, 1954, page 57 in regards to Bing's first TV special...

For two years the Columbia Broadcasting System tried to get Bing Crosby to join the parade of film stars moving into TV, but, except for brief guest appearances, the Groaner was "too busy" as oil tycoon, rancher, investor in scores of enterprises. Finally Crosby broke down and put himself on film in a half-hour TV program. To millions of Americans who tuned in last Sunday the Bing Crosby Show brought back memories of radio, 1932, and an era when the blue of the night regularly and tunefully met the gold of the day.

On TV Bing was the same old Crosby. He did a fairly spry song and dance. He indulged in mild horseplay with Guest Star Jack Benny. But, as was proper for a man who has been probably the finest and certainly the most enduring popular singer of his time, Bing kept the show mostly musical, singing in his easy, artful style. Feeling old (49), he sighed as he watched Benny with pretty Sheree North: "Oh to be 39 again." Then, eyeing a graceful retirement on his multimillion-dollar fortune, Crosby decided not to film another TV show until spring.

Posted by David Lobosco at 3:42 AM