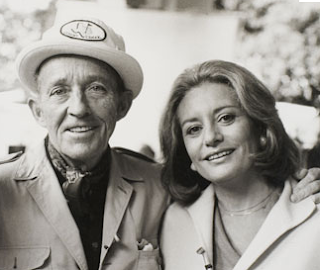 The now famous Barbara Walters interview was conducted at Bing's San Francisco home in May, 1977, while he was recovering from a ruptured intervertebral disc suffered in a fall two months earlier following a concert commemorating his 50th anniversary in show business. His 17-year-old daughter, Mary, had already moved out of her parents' home into her own apartment and was contemplating moving in with her boyfriend, Eb Lottimer. Following her father's death, Mary and Lottimer did move in together and later married. Neither Mary's mother nor her two brothers attended the wedding. Mary and her husband divorced in 1989.

WALTERS: Suppose one of your sons came home and said, "Dad, I've got this girl and do you mind if we share a room here in the house?"

BING: In OUR house? No chance!

WALTERS: It happens in other families.

BING: Well, it wouldn't happen in MY family. If any one of them did that I wouldn't speak to them ever again.

WALTERS: Do you mean that if one of your sons came home and said "I like this girl and I'm living with her and we're not married" you would never speak to him again?

BING: Aloha on the steel guitar.

BING: Well, I was raised a Catholic. We believe in marriage.

WALTERS: And you'd rather he be married than maybe spend some time and found out what she was like?

BING: He doesn't have to take her to bed to find out what kind of woman he's marrying.

BING: I'd say take your things and move where you're having the affair.

WALTERS: And you wouldn't talk to her or see her?

WALTERS: This daughter whom you adore?

Posted by David Lobosco at 3:40 AM