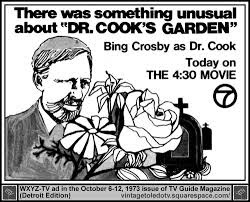 Here is another review from our resident Bing Crosby guru Bruce Kogan. This time around he is reviewing a very different Bing film. It is actually the television movie Dr. Cook's Garden, which was a very excellent film if you can find a copy...

I'm sure that this was not intended to be Bing Crosby's swan song to feature films, but that's what it turned out to be.

Crosby is cast against type here. He's the kindly old country doctor in this story who lives and practices in a Norman Rockwell like small town. But Crosby is the town's terrible secret. Unbeknownst to the residents, old Doctor Cook has been euthanizing those he feels have no positive contribution to make. The old mostly, but even younger ones like a crippled child whose medical bills are breaking his parent's finances. A young colleague, Frank Converse, discovers what he's doing and the rest you have to see for yourself.

Burl Ives had played the role briefly on stage, and actually got good reviews (the play seemed too slight to the critics, and to New York audiences). The story is this: Frank Converse is Dr. Jimmy Tennyson, who is returning to his small home town to work with the man whom he always admired the most, Dr. Leonard Cook (Bing). Cook is the ideal small town doctor (reminiscent of his young doctor who goes to the New England Town to assist Barry Fitzgerald in WELCOME STRANGER). He is warm and kindly, and full of common sense. He also has a green thumb, being usually in his personal garden when not with his patients. So Converse is very happy to be working with his emotional/educational mentor. 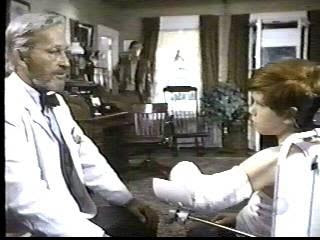 But in now working closer with Cook, Dr. Tennyson begins to notice that there are some odd deaths that accrue in the town. People will ask Cook to come in for some minor cold or something like that, and will be dead in twenty four hours. Tennyson soon begins to notice that the people who die so suddenly are not really mourned. His girlfriend, Janey Raustch (Blythe Danner), points out that many of them were notoriously bad tempered neighbors, cruel to their families or to pets or other people, or drunkards who made life hellish for others, and so they aren't missed. Eventually Tennyson starts questioning Cook, and after some attempts at shrugging off Tennyson's questions Cook begins to admit that the not-to-loved departed were possibly sped on their way with Cook's assistance.

Tennyson is (naturally) astounded to hear that Cook has been poisoning (with overdoses of morphine and other drugs) these patients. Cook looks upon the town as a grander version of his garden, and these bad people as the equivalent of the weeds that he removes from his real garden. 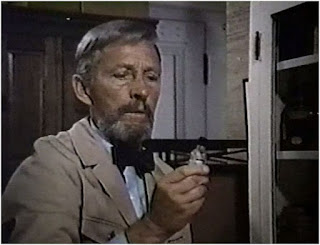 The tension in the story is how Tennyson finds the growing number of dead "bad" people affecting his own conscience, and how his uncertainty is effecting his relationship with Cook, who is beginning to wonder if Tennyson is another weed to remove.

It's an interesting vehicle for a man who was known as THE Catholic entertainer. And it has Bing's one and only screen death in his career. Solid acting by Bing and the cast.... 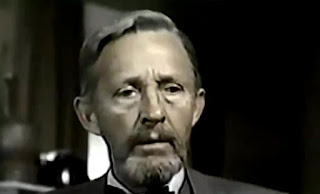 Posted by David Lobosco at 9:29 AM