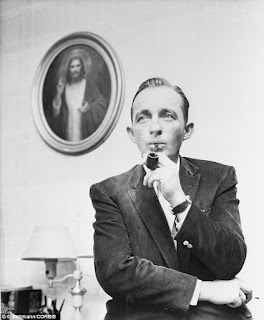 With nearly (but not every Bing recording) almost available in one form or another, I thought it would be fun to revisit a more simpler time, when Bing fans had to rely on bootleg records or 3rd generation cassette tapes for their fill of rare Bing material. One man that helped to bring great Bing Crosby radio recordings to the foreground was Eddie Rice. Younger Bing collectors may not recognize the name, but us "old timers" sure do!

The Rice tapes were also the source of 3 JSP LP´s(Bing Crosby In The Thirties),that were issued between 1984 to 86 by Geoff Milne with transfers and engeneering by Dave Bennett and John R. T. Davis from the Derek Parkes collection.The sound is good. Even better are the CD A Bing Crosby Calvacade Of Song(Festival-Interfusion also taken from Trotter acetates (Rice tapes?) and was mastered by David Carrington.

How Eddie Rice get to the "Rice tapes":

"...But he is a collector with a difference.When he began to rebuild his collection (His first collection Eddie sold financing the medical treatment for one of his parents) a mutual friend gave Ed Rice the address of John Scott Trotter, Bing´principal music director and orchestra leader. Rather than waste time writing letters, Ed impulsively drove to Trotter´s address and knocked on the door .Each discovered that the other was sincerely devoted to the music of Bing Crosby and they became great friends. Once during a visit Ed asked John Scott Trotter if he ever kept reference recordings of the Kraft Music Hall and was thrilled to learn that most had been kept .In fact, he was told, the reference recordings were beneath their feet,stored away in a crawl space under the floor boards! John Scott took his friend around to a small access door. In an instant his guest was under the floor where he discovered dusty stacks of acetate recordings;mostly 10" mixed with a few 12" records. 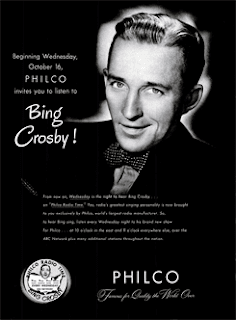 He carried an armload back into the apartment and looked over them carefully .Their labels were blank white with date notations and a few song titles scribbled on them. As Ed sorted, John Scott explained how he had used them to compare musical passages or review a number with Bing they planned to repeat.Most were Bing solos with bits of dialogue before and after with cast and guests.Few collectors had ever been in such a remarkable position! Rice asked his friend if he might borrow and copy the material onto tape.Trotter hesitated only because the music on them was now old fashioned. He and Bing were into modern arrangements.In fact,Trotter had been considering donating them to a university anxious to use them as study-resource material. Ed Rice continues:

"well I was exited of course and concerned too.I asked John Scott to consider that the material represented a great opportunity to share and preserve this once very popular style of orchestral composition.Since Bing had a legion of followers,these people too would be greatly enriched with copies of such material on a no cost basis.It seemed to me that preservation would be ensured among Bing´s friends in the collecting society around the world.I argued that the material could still be made available on a non-exclusive basis to a university but should not be limited to that.We talked many times about this and finally he generously agreed. I can still remember John Scott Trotter´s response,´Alright Eddie,take them home,put them on tape.` 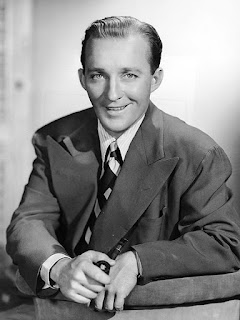 For the next several months,I guess it was well into 1963, I spent most of my free time copying out the soft acetate recordings,the test or reference recordings. Most of the 500 were clear enough to tape although some had a few technical faults. I also compiled a list detailing all the known information such as broadcast,rehearsal dates,support musicians,titles and voices.I sent this along to fellow collectors knowing these would be copied endlessly.I expected this.Even the list I compiled has now become a kind of classic publication distributed among Bing´s admirers.Over the years that followed I´ve noticed some of the songs appear on óldtime´radio broadcasts and records.And I´m happy about it!Here he is still young as,so very lightly,he sang those ten years of Kraft Thursdays.Perhaps never again would Bing Crosby sing quite so easily and carefree as on those wonderful radio programmes.

As a collector the most exiting time in my career was to be invited by Bing Crosby himself to put his personal record collection in library order.....""

(Sheldon O´Connell:Bing-A Voice For All Seasons) 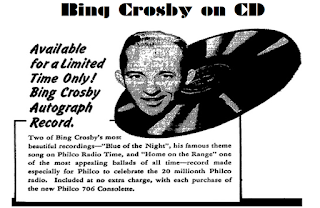 Posted by David Lobosco at 8:09 AM