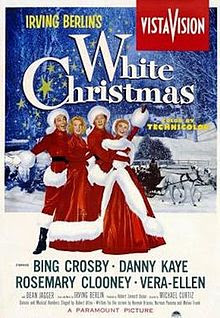 I had the the great opportunity to see 1954’s White Christmas in a movie theater a couple of days before Christmas in 2017. I actually fulfilled one of my bucket list items by seeing a Bing Crosby movie in a theater. I had never had the pleasure of seeing one like that before. I have to admit that White Christmas has never been my favorite Crosby film. I thought the story was contrite, and I did not care for the pairing of Bing with funny man Danny Kaye. However, upon seeing this movie in the theater, I have a completely new appreciation for the film.

The beloved classic that everyone watches during the holiday season is a lot different from what was proposed in the beginning. At first, Bing Crosby turned down the role due to the recent death of his wife Dixie Lee. However, Bing knew working on a musical with Irving Berlin tunes was destined to be a hit so he signed. Bing had co-star approval, and had wanted Fred Astaire for the role of his Army buddy. Crosby and Astaire had previously starred in Holiday Inn (1942) and Blue Skies (1946) earlier. Astaire read the script, but he then turned it down. The last movie that Astaire had made for Paramount was the 1950 disastrous musical Let’s Dance with Betty Hutton, and by 1954 Astaire was really being choosy on what roles he was accepting at that point. Next Bing wanted to work with dancer Donald O’ Connor again. Donald had played Bing’s younger brother in an earlier Paramount musical Sing You Sinners in 1938, and Bing and Donald had work together on radio shows since then. O’Connor was all set to be in the film, until he broke his ankle right before film rehearsals were set to begin. This sent Paramount scrambling, and they came up with the idea of pairing Bing with comedian Danny Kaye. 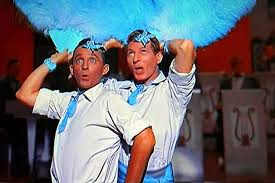 Even though Kaye was third choice for the film, he had this to say about Bing:

"I loved to work with him. I had the feeling he was my close personal friend. The real truth is that everybody knows Bing, but no one knows him. Through the years, he has created a legendary character that is so vivid, no one knows where the legend begins and the real Crosby leaves off. I thought I knew Bing--thought I knew all about him until we started to make White Christmas. Then I realized I actually didn't know the man at all. The truth of the matter is, there isn't a lazy bone in Bing's body. He works harder than any man I've met--but he does it with an easy casualness that makes him look lazy." (The Danny Kaye Story pg 198).

The movie plot, as flimsy as it may be, does has some serious overtones. By 1954, World War II had been over for almost a decade, and the film touches on what happens to soldiers after the fighting is over. Like many of Irving Berlin’s movie musicals, the plot of White Christmas is basically a vehicle to move from song to song. Many of Berlin’s standards are present like “Blue Skies”, “Heat Wave”, “Abraham” and of course the title song that was sung in the first minutes of the movie by Bing, and then by the group at the end. The new songs that Berlin wrote for the film were good but not up to par with the songs he was writing two decades earlier. My favorite of these new songs was the torchy number “Love You Didn’t Do Right For Me” which was sung in the movie by Rosemary Clooney. Other new songs like “Snow” and “Sisters” have also become standards....  TO BE CONTINUED... 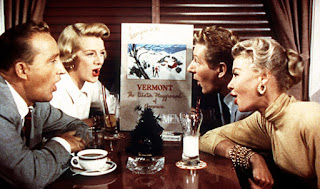