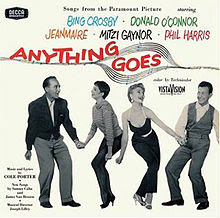 At lot of movie studios when they are making a movie version of a Broadway show try to keep the musical score intact. However, Paramount Studios had a habit of chopping up a Broadway score and adding different songs to their movie versions. They did this to Cole Porter in 1936 for that version of Anything Goes, and supposedly it caused a rift between Cole and Bing Crosby. They kept a lot of Cole Porter’s songs in the film, but they also cut a few and added songs that were written by Sammy Cahn and Jimmy Van Heusen. Cahn and Van Heusen were good songwriters, but they were no Cole Porter. While we got to hear and to watch the cast perform great Cole Porter standards like “Anything Goes” (sung by Mitzi Gaynor), “You’re The Top” (sung by Bing, Mitzi, Donald O’Connor, and Zizi Jeanmarie), and “All Through The Night (sung by Bing), we also witnessed the hokey songs written by Cahn and Van Heusen for the film like: “You Can Bounce Right Back”, “You Gotta Give The People Hoke”, and “A Second Hand Turban”. At times it felt like there were two musical scores in the film. I am okay if Paramount wanted to punch up the score with different songs, but the Cole Porter songbook was vast, and they could have used dozens of other Porter songs. They even brought in a third songwriting team in Leo Robin and Frederick Hollander, and that duo wrote two other songs for the film that were not used called “Am I Awake” and “Hopelessly In Love”. Nothing against those other song writers but it was a slap in the face to Cole Porter.

The two best musical numbers in the film was the love song “It’s Delovely” which was performed by Donald O’Connor and Mitzi Gaynor. Their singing is charming and the dance number was definitely the best number in the film and probably one of the best numbers that Paramount filmed in the 1950s. The other number that I liked was the closing number “Blow Gabriel Blow” which was performed by Bing and the whole cast. Some people online had an issue with a man singing the song since Ethel Merman introduced and sang the song on Broadway, but it was a great huge Hollywood finale, and Bing did it justice. The song was a big send off to Bing who had helped to get Paramount out of near bankruptcy in the 1930s when he signed with the studio. I liked the number myself. 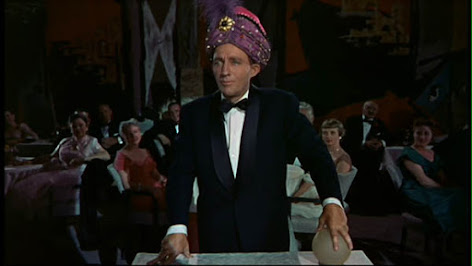 The critics were mixed though when the film premiered in New York on March 21, 1956… The Variety reviewer said: "It’s a bright offering for Easter release, geared to play an engaging tune at the wickets. Male topliners Bing Crosby and Donald O’Connor go together as

though born to give the zip to what scripter Sidney Sheldon has concocted hereunder the stage title. While there are Cole Porter songs and the legit handle is still carried, that’s about all that remains of what went on behind the footlights, and there’s scant resemblance to Paramount's 1936 film version, in which Crosby also starred with Ethel Merman".

A H Weiler, writing for The New York Times, thought that, "For all its activity, Anything Goes is, in the main, standard musical comedy. Some of the principals are decidedly decorative and talented. The script, however, is transparent and fragile."

There are a couple of fun goofs in the film if you watch close enough and have seen the movie as many times as I have. During the "Ya Gotta Give The People Hoke" number Bing Crosby and Donald O'Connor go into a prop room, pick up a prop, go on stage, do a "bit" and go back to the prop room. About midway through, Bing comes out on stage wearing a Fireman's hat. There is a pile of brownish debris and several piles of white material that were not there a second before, indicating that one or more "bits" had been cut after filming. Also, during the "You're The Top" number Bing and Mitzi Gaynor are on the lifeboat deck on one side of a partition while Donald O'Connor and Zizi Jeanmaire are on the other side. All are singing yet, though the deck is open to the sky, no one hears the others. Also, there are no partitions on a lifeboat deck.

So even with the goofs and my complaining about the film, I think Anything Goes is a pretty good movie. The film was successful for Paramount, and it marked the end of Bing Crosby’s association with the studio. I do recommend this movie to any Bing Crosby fan, and the film overall is a good musical. It is a good musical by Paramount’s standards but maybe not by MGM standards. Just look at Bing’s first post Paramount musical – High Society for MGM later that year. That is how a musical should be made! Again you may not be blown away by 1956’s Anything Goes, but you will enjoy the film... 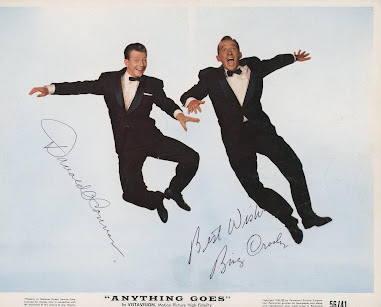 Posted by David Lobosco at 9:15 AM