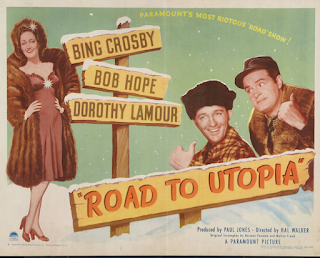 The movie was finally released on March 22, 1946, and Road to Utopia was a big success. I haven’t watched the movie in about five years so it was nice to have a reason to view the film again. Bing Crosby, Bob Hope, and Dorothy Lamour were at the top of their careers when this movie was filmed.

An oddity in the film that I never understood was the inclusion of Robert Benchley in the film. Benchley was a humorist who became a film actor. He was added to Road to Utopia as a “narrator” in the film, but he adds very little to the movie. Benchley, who suffered from cirrhosis of the liver, died on November 21, 1945 at the age of 56. He died before the movie premiered. Benchley’s appearance is one of my only real complaints of the film.

The chemistry of Bing, Bob, and Dorothy was amazing, and the team looked like they were having fun but that was not always the case. There is an urban legend that Bob Hope recalled that during the scene where he and Bing Crosby were bedding down beside their cabin in the Klondike, they were to be joined by a bear. They were told that the bear was tame and its trainer would always be nearby. Against their better judgment they went along with it. However, when the cameras started filming, the bear ambled over to Hope and, instead of lying down next to him like it was supposed to, the animal sniffed him and started growling. Hope and Crosby immediately stopped the scene and refused to work with the bear any longer, despite the trainer's protestations that it was tame and harmless. The next day the bear attacked its trainer and tore his arm off. In another scene, Bing and Bob were supposed to be climbing an ice-covered cliff when the rope broke, and the safety mattress was out of place. Bob fell on Bing who suffered some back problems because of it. 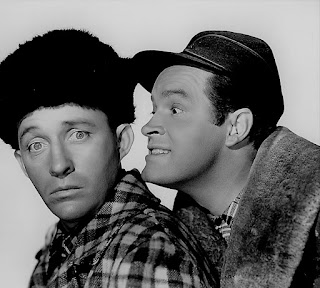 People went to see Road to Utopia for the laughs and the fun, but Bing’s vocalizing was also a big draw. The music was written by Johnny Burke and Jimmy Van Heusen, who wrote most of Bing’s film music during this time. Like I said earlier, it is a shame that Bing and Bob never recorded the song “Goodtime Charlie” commercially, but they did record another song from the film that was one of their most famous songs – “Put It There, Pal”. Dorothy sang two great songs “Personality” and “Would You” in the film, both of which Bing recorded for Decca. Bing also got the opportunity to sing a philosophical number “It’s Anybody Spring”, and a traditional love song for the movie “Welcome to My Dream”. “Welcome To My Dream” is not very well remembered today, but I think it’s one of the most beautiful love songs Bing sang in a Road movie. Bing’s version of “Personality” was the biggest hit of the film. Recorded with Eddie Condon’s Orchestra, Bing turned it into a great jazz song, and it rose to number #9 on the American charts in 1946.

The critics really loved Road to Utopia too. Bosley Crowther of The New York Times wrote: "Not since Charlie Chaplin was prospecting for gold in a Hollywood-made Alaska many long years ago has so much howling humor been swirled with so much artificial snow as it is in “Road to Utopia,” which came to the Paramount yesterday." Variety also wrote: "The highly successful Crosby-Hope-Lamour “Road” series under the Paramount banner comes to attention once again in “Road to Utopia,” a zany laugh-getter which digresses somewhat from pattern by gently kidding the picture business and throwing in unique little touches, all with a view to tickling the risibilities. Very big box office results assured.” Road to Utopia was one of the top ten grossing movies of 1946, and it was Bing’s highest grossing movie that year next to The Bells of St. Mary’s.

The movie does not offer an exotic location like Singapore or Zanzibar, but it is such a fun movie. Even if you are not a fan of classic movies, you can enjoy and appreciate the comedy and the fun that the team had. Bing Crosby was in great voice for the film, Bob Hope’s comedic timing was perfect, and Dorothy Lamour looked beautiful as always. What else could the audience ask for! I recommend taking a road trip and going on a holiday with Road to Utopia. Send me a postcard, and you will not be disappointed! 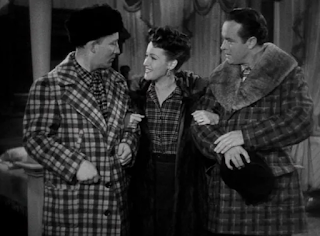