BING AND THE 1952 OLYMPIC TELETHON 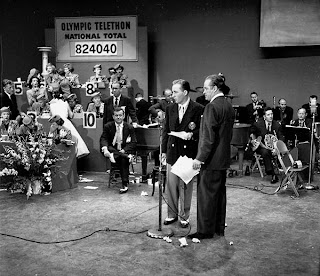 Three old friends, Bing Crosby and Bob Hope at table and Dorothy Lamour at microphone, lead 14 1/2 hour Olympic Telethon that received more than $1,000,000 in pledges for the U.S. Olympic team.

Bing Crosby, Bob Hope and scores of other personalities went to bat for the 1952 U.S. Olympic team yesterday and smashed a sizzling home run – worth more than $1,000,000.

The two stars sang and joked their way through a 14 1/2 hour television marathon which was beamed to a nationwide audience estimated at 50,000,000. And their efforts – plus those of hundreds of other persons responsible for the show – raised the Olympic fund well over its goal.

Two television networks – NBC and CBS – carried the show by microwave to 68 stations in 48 cities from coast to coast. The telethon, staged at NBC studios in the El Capitan Theater, began at 8 p.m. Saturday and ended for the tired performers at 10:30 a.m. yesterday after switching to New York for appearances by several noted sports figures.

Crosby, who teamed with Hope to answer hundreds of telephone calls and introduce the more than 250 actors, dancers and singers on the program, was making his television debut on the record-breaking telethon. 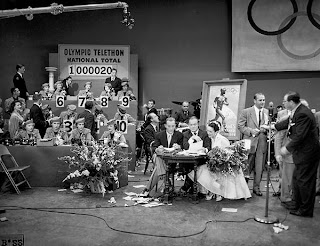 He and Hope deserted the cameras for three or four hours early yesterday morning to freshen up but were back on the stage for the finale and exchange comments with the New York end of the show.

Avery Brundage, president of the U.S. Olympic committee, opened the program Saturday night with an announcement that the Olympic fund was still nearly $500,000 short of the money it needs to sent the nation’s athletes to Helsinki this summer. Fourteen and a half hours later, just three minutes before the show ended, contributions donated and pledges across the nation as a result of the program were announced as $1,000,020.

Officials said this figure, however, probably will be swelled by many thousands of dollars this week as mail contributions are received ….

Hope and Crosby, obviously weary after their long stint before the cameras, were still joking as they posed with Miss Lamour after the show.

“Well, Bob, ready for a fast 18 holes. Where’il it be? Lakeside or Rivera?” Crosby cracked.

The telethon was a big success — or so it seemed. A brief mention in the Hedda Hopper’s July 12, 1952, column reported that “Bing Crosby and Bob Hope are terribly upset because only a third of the money pledged on their Olympic telethon has been collected.” 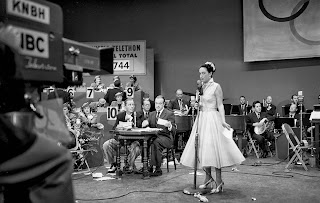 But the $300,000 was enough to help get the U.S. team to Helsinki. According to a story at tvparty.com, once the telethon doubled the stated goal of $500,000, many donors refused to honor their pledges...

SOURCE
Posted by David Lobosco at 7:09 AM