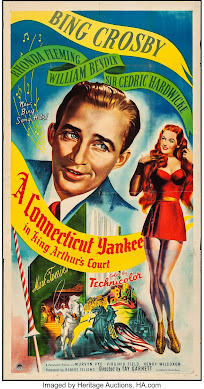 Unfortunately, Rhonda Fleming is supposed to marry the brave knight Sir Lancelot (Henry Wilxocon). When Sir Lancelot finds out Bing is trying to steal his girl, he challenges Bing to a joust. Bing is good on a horse but no challenge to Sir Lancelot as a knight. Instead of Bing fighting him, he uses rodeo type triCks like knocking Sir Lancelot off his horse and embarrasses him instead of defeating him in a battle. Rhonda Fleming feels that Bing did not do the honorable thing and says she wants nothing to do with him. Meanwhile, there is a subplot where the king is out of touch with the people of his kingdom as they die in poverty of the plague. Bing suggests to the king that he should go see for himself how his people are living. They dress as peasants and travel the country. Merlin overhears their plans, and they are captured and sold as slaves in the market. Rhonda Fleming tries to save them and realizes that she loves Bing, but she is captured as well. Bing manages to overpower the guard with the aid of a magnet that he happens to have on him still. Merlin captures them again and decrees that under the law, the slaves attempting escape must be put to death. Reading his almanac, Bing realizes on that very day there was an eclipse. Pretending to possess magic, Bing calls on the total darkness of the world. Everyone is terrified by the darkness, and they are released. Rhonda Fleming, meanwhile is being held as a prisoner by Merlin, and as Bing frees Rhonda Fleming he is knocked unconscious by a guard and awakens to find himself once again in the year 1905. Bing relates this story to a lord who looks a lot like the king (also played by Cedric Hardwicke). The lord says that Bing’s story is remarkable but just then the lord’s niece comes by, and it is none other than Rhonda Fleming. They give each other a wink and a happy ending ensues.

The love story between Bing and Rhonda Fleming is well acted, and they had great chemistry. The film sort of drags on in the middle. I hate to say it but as I rewatched the movie now for this review, I found myself bored at parts, but when Bing and Rhonda Fleming (who was known as the Queen of Technicolor) are on the screen there was film magic. Rhonda Fleming gets to sing one of the songs written by Burke and Van Heusen called “When Is Sometime”. The song never became a hit, but it was quite pretty. Bing sings a song in the beginning as a blacksmith in 1905 called “If You Stub Your Toe on The Moon”. The song is forgotten today, but if you get a chance listen to the song in the movie or Bing’s Decca recording of it because it is really a great song. In 1949, Frank Sinatra recorded it for Columbia Records, and Tony Martin recorded it for RCA, but Bing’s version was the best. The main love song in the film was “Once And For Always” which I think holds up more than this movie does. Bing made a solo record of it, and also as a duet with Rhonda Fleming. It is one of the most beautiful love songs Bing sang in the movies in my opinion. The one other song in the film was “Busy Doing Nothing”. Bing sang it with William Bendix and Cedric Hardwicke, both who are non-singers, so the song was not given much of a chance to be remembered. Even though the great Victor Young conducted the music on the film, it seems like one other song was needed for the film. 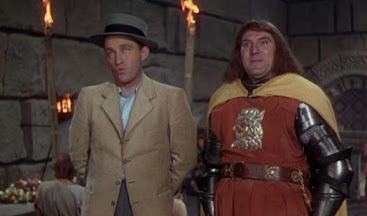 Movie reviews were generally positive for “A Connecticut Yankee” with Bosley Crowther of The New York Times writing: "The solid, reliable humors of Mark Twain’s A Connecticut Yankee in King Arthur's Court, which have already done yeoman service in two films and a Broadway musical show, have been given another going over—with eminently satisfactory results—in Paramount’s new film of the same title, which came to the Music Hall yesterday. And for this we can thank Bing Crosby, primarily and above all, because it is Bing in the role of the Yankee who gives this film its particular charm ... But it is still Bing’s delightful personality, his mild surprises and sweet serenities, and his casual way of handling dialogue that makes this burlesque a success. No one in current operation could qualify, we are sure, to play the Connecticut Yankee the way the old Groaner does.” Variety was not quite so enthusiastic: "Picture wears the easy casualness that's a Crosby trademark, goes about its entertaining at a leisurely pace, and generally comes off satisfactorily. It's not high comedy and there’s little swashbuckling.”

Would I put this 1949 Bing effort among my favorite Bing films? I would say no, however despite any negativity I have about the film, it is still a worthwhile Bing film. Bing and the cast rise to the challenge of a silly script to put in some great performances. The high points of the film is always Bing’s singing and acting, but in this film look out for highpoints like the amazing beauty of Rhonda Fleming as well as the unstated comedic talent of William Bendix. The film is fun and enjoyable, and I am so glad Paramount spent the extra money to make it in technicolor. The movie is worth it alone to see Bing’s blue eyes and Rhonda Fleming’s red flowing hair...
MY RATING: 6 OUT OF 10 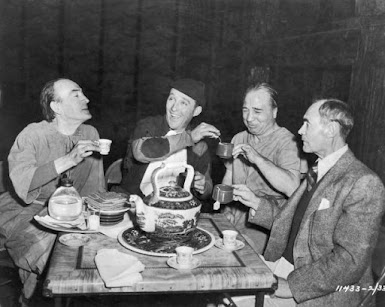