BING ON FILM: ROAD TO UTOPIA - PART ONE 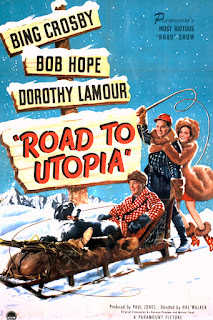 I have always loved the Road movies, so I figured I would review my favorite film of the series – 1946’s Road to Utopia. The pairing of Bing Crosby and Bob Hope was comedy gold, although I have to admit that I have never cared for Bob Hope much. I liked Bob in the Road movies and his more dramatic roles (especially 1959’s Beau James), but other than that I never cared much for his movies. The duo of Bing and Bob definitely had fun in these movies, and Road to Utopia, the fourth film in the series, was no different. Filmed between December of 1943 and March of 1944, the film was not released until 1946 because the studio did not want the movie to overshadow Bing’s role in Going My Way, which the studio was pushing for him to get an acting nomination for at the Academy Awards. Of course, as we all know Bing got the nomination and took home the best actor award.

The plot of the movie, like most of the other Road movies did not seem to matter much. In my opinion the plot of Road to Utopia was the most complicated of any of the Road movies. The opening of the movie finds Bob and his wife (Dorothy Lamour) now elderly. There’s a knock on their door, and in walks Bing and the trio reminisce about their adventure in the Klondike. In the next scene we flashback to the turn of the twentieth century. Bing and Bob are vaudeville performers and minor scam artists. They open with a rousing song “Goodtime Charlie” that I wish they would have recorded commercially. They try to scam their audience at a performance, but they are discovered and try to run away to Alaska. They stow away on a ship going to Alaska, and while on the boat they bump into two real life murdering criminals called Sperry and McGurk. Bing and Bob manage to tie up the real criminals, and they steal their identity not fully knowing who they came across. Bing and Bob stole Sperry and McGurk’s jackets to look more tough as well. Unknowingly to the boys, the one jacket has a copy of a map which was the directions to a gold mine worth millions. 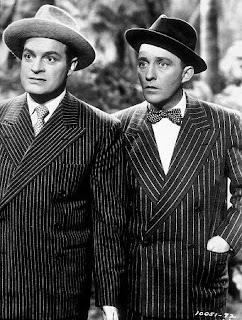 Arriving in Alaska, the boys were amazing that everyone was afraid of them. At a local saloon they meet up with Dorothy Lamour and are instantly smitten. Dorothy, thinking the boys are Sperry and McGurk tries to seduce both of them to get the map off of them. Bing and Bob discover they have the map, and they decide to split the map in two with each of them getting a piece one will not be able to scam the other. Dorothy follows them, and the boys admit to Dorothy at this point that they are not Sperry and McGurk. Dorothy realizes how much she loves Bing, but she still steals the map for the owner of the saloon where she sang. Bing and Bob are finally confronted by the real Sperry and McGurk, who they escape from again, but at this point the boys realize that Dorothy stole the map.

Bing and Bob manage to escape from the real killers and go back to town to find Dorothy. They try to readopt their Sperry and McGurk personas but discover that they are likely to be hanged for their past crimes. The boys scare off the posse who wants to hang them with a stick of dynamite and rescue Dorothy. Bing and Bob leave the dynamite lit just as the real Sperry and McGurk arrive, and the explosion kills the real criminals. Bing, Bob, and Dorothy escape, but the ice splits on the frozen tundra leaving Bob and Dorothy on one side, and Bing on the other side with the mob quickly approaching. Bing throws Bob his portion of the map, and Bing tells Bob to take care of Dorothy as Bing turns around to face the mob. The movie scene then changes to the present, with the aged Bing telling Bob and Dorothy how he escaped the mob. Bing is surprised to hear that Bob and Dorothy have a son. The son walks down the stairs and looks exactly like Bing. At this point Bob looked into the camera and said, “We adopted him.” By far, this is one of the greatest endings of any Road movie, and I am actually surprised this got by the censors.... 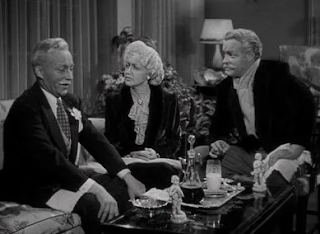