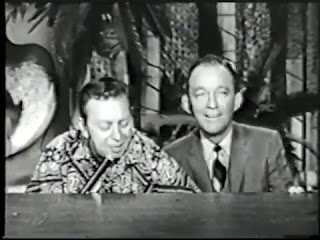 Mel Torme was definitely an admirer of Bing. He got to record with Bing early on in Mel's career in the 1940s, and he continued to have great stories about Der Bingle:

"In 1945, my Mel-Tomes and I walked into Decca recording studios in Hollywood to cut our very first record with Bing. We didn't know what to expect. Bing Crosby. A terror? Haughty? Difficult? When he walked in, grinning, relaxed, and friendly, we relaxed as well and proceeded to make what I feel was a very good record. Bing treated us as though we were old friends, making, not forcing, suggestions. There were a few solo spots for me, and I sang them hesitantly. Bing encouraged me to 'sing out' and egged me on during the actual making of the record .... If there is anyone I have modeled myself after over the years, I would have to say it is Bing Crosby.

In 1975 he invited me and my family to lunch at his home just outside of San Francisco. Mary Frances and Harry, Bing's kids, were on hand as well as Kathryn, and it was a funny, jolly, loving luncheon, full of stories and remembrances. After lunch, Bing, sans hairpiece, asked Harry to go get his guitar. We adjourned to the music room, and, just like that, Bing sat down and began to sing. He did about eight tunes, invited me to join him, which I did, and that's the way the afternoon went .... That night he brought the whole family to the Fairmont, sat at a front table (still sans toupee), and stayed through my whole performance. I never quite got over that." 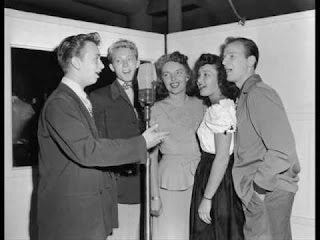