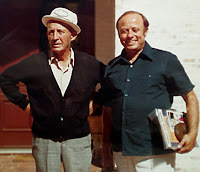 The name of Bob Deflores will be known to the avid Crosby fan. I found this interesting bio of Bob on the internet:

Bob DeFlores grew up surrounded by the entertainment community. He was born in San Francisco and raised in Hollywood, where his parents performed in movies, radio, and nightclubs. His aunt Iris appeared with Johnny Weissmuller in the Tarzan series, and his aunt Gladys worked as a secretary for Harold Lloyd.

Bob began collecting and restoring films in 1953. He used to do it as a hobby. Eventually, he quit his job as art director for a Minneapolis architectural firm and began searching for and preserving films full time. Over the past 50 years he has located and preserved hundreds of films from 1900 to 1950: newsreels, comedies, sports footage, features, and more. His quest to find rare film footage can be likened to the work of a detective. His sleuthing has led him to the only known prints of Outside the Law (1921, with Lon Chaney), Fatal Marriage (original title Enoch Arden, 1916, with Lillian Gish), and Song O' My Heart (1930, with tenor John McCormack).

Bob's special interest is early jazz and big band films. One of his favorite singers is Bing Crosby, so Bob collected many Crosby films including such rare prints as Please (1933), The Fifth Freedom (1951), and Here is My Heart (1934). His collection efforts were rewarded in 1976 when he donated Swing with Bing for showing at the Bing Crosby Golf Tournament in Pebble Beach. Bing had lost his copy in a fire and had not seen the 1937 film in many years. When he spotted his father and brother in the film, Bing was deeply moved.

In 1977, Bing invited Bob to visit his home and Bob gladly accepted. Bob showed Bing many rare, nearly lost, Crosby films and arranged to give him copies. In return, Bing let Bob borrow and copy anything from his film vault. Bob chose rare films like The Road to Home which is not listed in Bing Crosby filmographies and which most Crosby fans have never even heard of, much less seen.

Bob has also assisted many other celebrities in completing their film libraries, including Ginger Rogers, Eleanor Powell, Shirley Temple, Tex Beneke, Buddy Rogers, the family of W.C. Fields, Loretta Young, Frankie Carle, and Phil Harris. In a letter thanking him for unearthing Here is My Heart, a film she had been told no longer existed, Kitty Carlisle Hart said, "After 53 years, I thought I'd have to die and go to heaven to see it."

Bob's other professional experiences are many and varied. He has put together film programs for hundreds of organizations across the United States. He has helped many television stations with programming and has assisted on innumerable documentaries, tributes, and television specials. These include Minneapolis in 19 Minutes, the A&E Biography and History series, and Ken Burns' Jazz and Unforgiveable Blackness: The Rise and Fall of Jack Johnson. Bob has worked with CBS and NBC and supplies the Grammy Awards and the Kennedy Center Honors with rare footage.

As a supporter of good causes, Bob has helped with fundraising campaigns for the University of Kansas, Normandale Community College, and the Judy Garland Museum. He has lectured on film preservation at schools and even toured the nation's colleges with the grandson of W.C. Fields. In 2000, the Normandale Community College Foundation honored Bob by selecting him to receive their annual Community Connection award. This award recognizes all he has done over the years to connect generations through the history of film. 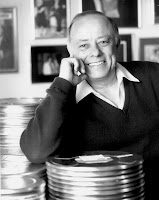 SOURCE
Posted by David Lobosco at 7:03 AM