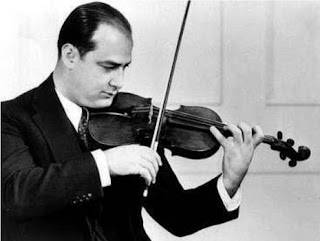 Along with guitarist Eddie Lang, I think Joe Venuti was one of Bing's favorite jazz men. Venuti worked with Bing during the Paul Whiteman years, and Bing used him a lot on his radio shows of the 1940s.

Joe Venuti claimed to have been born aboard a ship as his parents emigrated from Italy, though many believe he was simply born in Philadelphia on September 16, 1903. Later in life, he said he was born in Italy in 1896 and that he came to the U.S. in 1906.

Considered the father of jazz violin, he pioneered the use of string instruments in jazz along with the guitarist Eddie Lang, a childhood friend of his. Through the 1920s and early 1930s, Venuti and Lang made many recordings, as leader and as featured soloists. He and Lang became so well known for their 'hot' violin and guitar solos that on many commercial dance recordings they were hired do 12 or 24 bar duos towards the end of otherwise stock dance arrangements. In 1926, Venuti and Lang started recording for the OKeh label as a duet, followed by "Blue Four" combinations. Venuti also recorded a number of larger, more commercial dance records for OKeh under the name New Yorkers.

He worked with Benny Goodman, the Dorsey Brothers, Bing Crosby, Bix Beiderbecke, Jack Teagarden, the Boswell Sisters and most of the other important white jazz and semi-jazz figures of the late 1920s and early 1930s. Venuti and Lang recorded a series of milestone jazz records for the OKeh label during the 1920s. However, following Lang's early death in 1933, his career began to wane, though he continued performing through the 1930s, recording a series of excellent commercial dance records (usually containing a Venuti violin solo) for the dime store labels, OKeh and Columbia, as well as the occasional jazz small group sessions. He was also a strong early influence on western swing players like Cecil Brower, not to mention the fact that Lang and Venuti were the primary influences of Django Reinhardt and Stephane Grappelli. 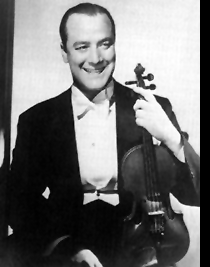 Venuti was also a legendary practical joker. According to one source, every Christmas he sent Wingy Manone, a one-armed trumpet player, the same gift—one cufflink. He is said to have chewed up a violin he borrowed from bandleader Paul Whiteman, when still on stage after his own performance with Whiteman's band had finished.

After a period of relative obscurity in the 1940s and 1950s, Venuti played violin and other instruments with Jack Statham at the Desert Inn Hotel in Las Vegas. Statham headed several musical groups that played at the Desert Inn from late 1961 until 1965, including a Dixieland combo. Venuti was with him during that time, and was active with the Las Vegas Symphony Orchestra during the 1960s. He was 'rediscovered' in the late 1960s. In the 1970s, he established a musical relationship with tenor saxophonist Zoot Sims that resulted in three recordings. He also recorded an entire album with country-jazz musicians including mandolinist Jethro Burns (of Homer & Jethro), pedal steel guitarist Curly Chalker and former Bob Wills sideman and guitarist Eldon Shamblin.