Here is a very interesting review of THE EMPEROR WALTZ from 1948 which appeared in the New York Times on June 18, 1948...

Imagine our old friend Bing Crosby as a Yankee at Franz Joseph's court, peddling a newfangled phonograph and wooing a countess on the side, and you have a thumbnail synopsis of Paramount's "The Emperor Waltz," the light-hearted musical farce-romance which came to the Music Hall yesterday. Picture it all in Technicolor, with the courtiers in flashing uniforms, the ladies in elegant dresses and Bing in an old straw hat, and you have a fair comprehension of the prospect and atmosphere. For "The Emperor Waltz" is a picture which can be characterized in a few words, but which is much more entertaining if you see it from beginning to end.

Not that there's anything staggering in the way of music or plot in this spoof which Charles Brackett and Billy Wilder produced, directed and wrote. A dash of "The Prisoner of Zenda," a twist of old Viennese "corn" and plenty of any "Road"-show nonsense and you have a composite of the plot. Likewise, three musical numbers are the extent of the score—and only one of these items is unfamiliar and new. 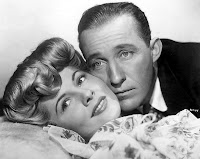 But, even so, Brackett and Wilder have made up with casualness and charm—and with a great deal of clever sight-humor—for the meagerness of the idea. And Bing has provided the substance which the farcical bubble may lack. As the corn-fed American salesman whose fox terrier dog runs afoul of the countess' fancy French poodle—and thereby inspires the romance—our boy is his usual delightful and completely unceremonious self, baffled by Hapsburg pomposity and candid in his confidence in love.

Nothing he says is likely to be mistaken for deep philosophy but it all has the sound of observation which lightens the weariness of life. If it's boop-boop-adoing "Santa Lucia" while sculling a Tyrolean lake boat, with the off-hand explanation, "I used to travel for a Venetian-blind company," or merely calling his sweetheart "Honey Countess" in a thoroughly natural way, Bing has the air of a fellow to whom the artificial is a bore.

And Joan Fontaine as the countess makes a beautiful counterpart for his open and genial directness. Icy and lofty at the start, she melts with magnificent acquiescence to his bland importunities of love. Maybe you wouldn't think so, but she turns in a sweet job of farce and frets for her poodle's torn emotions just as gravely as she does for her own. Likewise, Richard Haydn is cute as the emperor and Roland Culver makes a suavely snobbish courtier, while Sig Ruman is grand as the emperor's vet.

Best of the musical numbers is "Friendly Mountains," a yodel song which Bing ripples over his tonsils while walking down an alpine road, to be answered by magical echoes and a swarm of slap-dancers in the dells. It's a charming, melodious ditty and as cute in its staging as a cuckoo clock. Also amusing is a pick-up of the oldie, "I Kiss Your Hand, Madame," which is used to put the bashful canines—and also the countess—in the mood. Roberta Jonay and Bert Prival skip a lively dance to it, too. And the final romantic number, which Bing sings, "The Kiss in Your Eyes," is a pleasantly sentimental re-write on Heuberger's "Chambre Separée."

Set against gorgeous mountain scenery and richly palatial rooms, "The Emperor Waltz" is a project which should turn the blue Danube to twinkling gold...

SOURCE
Posted by David Lobosco at 7:53 AM