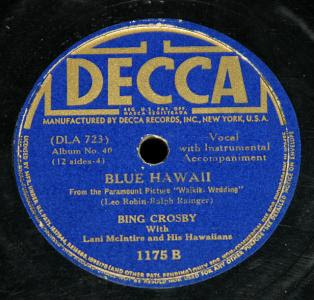 In the summer of 1993, the vocal group SWV was cruising along at number one with their song “Weak,” when a reggae band from England bumped them out of the top spot with a remake of a 60‘s classic. UB40 hit the top with a noted tune from a movie featuring a big name singer set in Hawaii from 31 years earlier. In turn, that movie drew its title and theme song from another movie featuring a big name singer which was also set in Hawaii, filmed 25 years before that.

Bing Crosby’s biggest hit of 1937 was a movie song, “Sweet Leilani.” It was the number three song of the year, behind Count Basie’s “One O’clock Jump” and Benny Goodman’s “Sing Sing Sing.” It was awarded the Oscar for Best Original Song that year, the only Academy Award taken by the movie Waikiki Wedding. Another song from that film was a 1937 top 5 for Crosby, “Blue Hawaii.”

“Blue Hawaii” became the launching pad for Elvis Presley’s eighth movie. Elvis made 33 films, and most would follow the template of the new feature. Big on scenery, lush with both flora and fauna; they may have been short on plot, but usually had a marketable soundtrack album, and with any luck, a hit single. In this case, the Blue Hawaii soundtrack spent 79 weeks on the charts, 20 at number one. As a matter of fact, by Billboard chart standards, it was the second most successful album of the decade of the sixties, topped only by the West Side Story soundtrack. 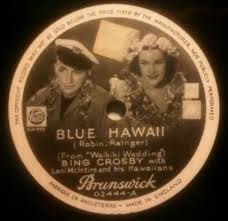 “Can’t Help Falling In Love” fell into line with those big post-Army Elvis hits, drawing melodic inspiration from a 1780 French love song, “Plasir D’Amour.” Songwriting cousins Hugo Peretti and Luigi Creatore teamed with Broadway song crafter George David Weiss to fit the melody to their romantic lyrics. At the time Blue Hawaii was hitting the theaters, this writing team already had the biggest single in the nation, with their adaptation of a 1920’s South African melody in the form of the Token’s single, “The Lion Sleeps Tonight.”

The March, 1961 sessions for the “Blue Hawaii” soundtrack took place in Hollywood at Radio Recorders. The island sound required extra hands on the session; a couple of ukulele players, harmonica, and Alvino Rey on steel guitar. Two separate versions of “Can’t Help Falling In Love” were recorded, a movie version, and one for single release. Over the course of time, the song went platinum, but in early 1962, it peaked out at number two behind “Peppermint Twist” by Joey Dee and the Starliters.

In the 70’s and 80’s, Al Martino, Andy Williams and Corey Hart charted with their cover versions of “Can’t Help Falling In Love.” UB40 had experience making hits out of other peoples catalog songs. Their first charted record was Neil Diamond’s “Red Red Wine,” entering the top 40 in 1984, but going all the way to number one in 1988 when they did a longer dance-oriented mix with an added rap. Five years later, UB40’s biggest success was their cover of “Can‘t Help Falling In Love,” and they did Elvis one better, taking it all the way to the top.

Songwriter George David Weiss worked on a number of movie scores and stage musicals, and co-wrote “What A Wonderful World,” recorded in 1968 by Louis Armstrong. The song was a hit in the UK, but in the US, the head of Armstrong’s label didn’t like it and wouldn’t promote it, so in its first release it sold fewer than 1,000 copies stateside. Another twenty years would pass before the movie Good Morning Vietnam introduced the song to new ears, and it hit the Billboard top 40. 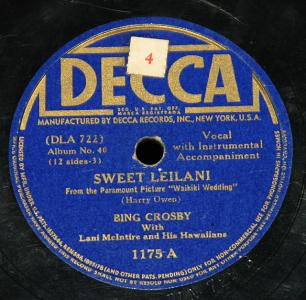 Hugo and Luigi produced hits for RCA records, including Sam Cooke’s “Twistin’ The Night Away” and “Another Saturday Night,” and “I Will Follow Him” by Little Peggy March. And whenever you get a little bit louder with the Isley Brothers’ “Shout,” part of the credit goes to Hugo and Luigi...

SOURCE
Posted by David Lobosco at 5:13 AM