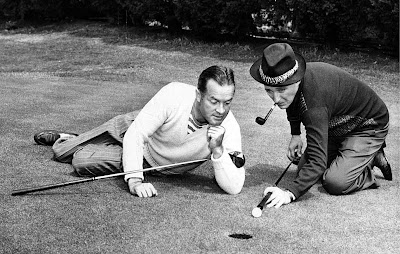 This image was not published until Dec. 8,1946, for a Times Sports section story promoting Hope and Crosby’s appearance at the National Blind Golf Tournament held at Inglewood Country Club.

Hope and Crosby appeared at countless charity golf events. For one such tournament, Times staff writer Charles Curtis dubbed Hope and Crosby as “the tee-time twins who always show up when the call of charity sounds for a golf exhibition.”

Since there was 10-month delay before publication, I’m guessing the image was taken to promote a now-unknown Hope and Crosby golf tournament appearance, only to be published later for a different event.

SOURCE
Posted by David Lobosco at 5:19 AM