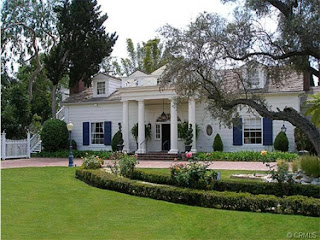 Anyone looking to put a bid on Bing Crosby's old estate is out of luck. It is officially off the market...

A Toluca Lake home still referred to as the Bing Crosby Estate despite a succession of other entertainment industry owners has been bought for $4.02 million. The property came on the market two years ago at $10 million. The singer and actor lived on the property from 1936 until early January 1943, when the 20-room house there was gutted in a Christmas tree fire, according to Los Angeles Times archives. Crosby was out at the time of the fire. His wife, Dixie Lee, and their four sons escaped injury.

The damage to the structure and its contents was estimated at $200,000, and the family's cocker spaniel, a complete collection of Crosby's recordings, his golf trophies and his pipe collection were lost. Among items recovered from the ruins was $2,000 in cash in the pocket of one of Crosby's coats.

The rebuilt Southern Colonial that stands on the site has six bedrooms, 5 1/2 bathrooms and five fireplaces in 7,132 square feet. There is a living room with marble fireplace, a billiards room and a den with a wet bar.
The two acres of gated grounds include rose gardens, fruit trees, a tennis court with grandstands, a swimming pool, a 2 1/2-bathroom cabana with changing rooms, sitting area and a kitchen, and a two-bedroom, two-bathroom guesthouse with a kitchen.

The estate was a childhood home of Micky Dolenz, the Monkees' drummer and singer.

Subsequent owners included actor Andy Griffith in the 1980s and actor Jerry Van Dyke and his wife, Shirley, who sold the home in 1997 for $1.93 million, public records show.

His recording of Irving Berlin's "White Christmas," featured in the movie "Holiday Inn," became a No. 1 hit in late 1942 and stayed there for 11 weeks.