THE ROAD TO IDAHO 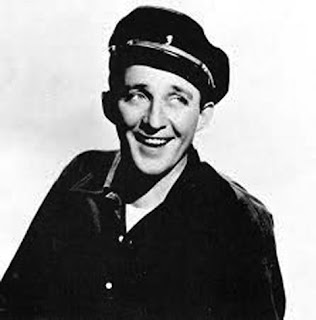 After Bing Crosby died in 1977 following 18 holes of golf near Madrid, Spain, Bob Hope said, "If friends could have been made to order, I would have asked for one like Bing." Nearly 3,000 mourners agreed and packed St. Patrick's Cathedral in New York City for his memorial service.

His fatherly figure persona with the happy smile, mellow voice and unique singing style made him one of the most popular icons in entertainment history. We're reminded of him every winter when he sings, "I'm dreaming of a white Christmas, just like the ones I used to know..."

And who can forget Bing clowning and dancing with Bob Hope and Dorothy Lamour - the Sarong Queen - in the 1940 Road to Singapore comedy movie, and the six other "Road to" films ending in 1962 with The Road to Hong Kong?

Harry Lillis Crosby Jr. was born in Tacoma, one of seven children,and was raised in Spokane after age 3. Graduating from Gonzaga High School and spending three years at Gonzaga University, Bing also had a heart for Idaho, recording a University of Idaho fight song - "You're the Gem State, Idaho."

Bing's father - a bookkeeper - was of English descent whose ancestors included William Brewster, who came to America on the Mayflower in 1620 and was religious leader of Plymouth Colony. His mother Catherine Helen (Kate) was a second-generation Irish-American.

At age 7, Harry Junior enjoyed a comic strip in the Spokesman-Review called The Bingville Bugle. A neighbor kid named Valentine Hobart started calling him "Bingo from Bingville," and that's how Crosby got his nickname.

While working a summer job as a teenager at Spokane's Auditorium, he was inspired by watching Al Jolson perform; kindling his interest in entertaining. His first stint in show biz was playing drums in a band performing at high school dances and clubs. Next was singing at the Clemmer Theater - now Spokane's Bing Crosby Theater.

In 1925, Bing and his piano player pal Al Rinker took off for Los Angeles, where Al's sister, singer Mildred Bailey, helped them climb the show biz ladder. After a number of low-level gigs earning them $75 a week each, they caught the eye of bandleader Paul Whiteman who hired them and doubled their salary.

Whiteman put together The Rhythm Boys trio of Bing, Al and pianist-singer-songwriter Harry Barris, which led to movies - singing Mississippi Mud and several other songs in King of Jazz, made by Universal in 1930. Then trouble began.

"After awhile, Whiteman and Crosby started to not get along," one source wrote. "Bing had a drinking problem, and that had landed him in jail a couple of times. He missed some of the filming of Whiteman's movie 'King Of Jazz,' after being involved in a drinking and driving incident. Whiteman got Crosby released from the jail. Crosby was escorted in handcuffs to the studio by police whenever he was scheduled to appear in the movie."

The following year, the Rhythm Boys had a contract hassle with management while performing in L.A. at the Coconut Grove at the Ambassador Hotel (where Robert Kennedy was shot and killed). They quit the gig and soon broke up. But Bing's career as a solo singer took off.

By 1936, he was host of NBC's Kraft Music Hall on radio, replacing his former boss Paul Whiteman. He held that job for the next 10 years and showcased his signature song, "When the Blue of the Night Meets the Gold of the Day..."

Bing appeared in more than three-dozen movies in the Thirties, and then hit the big time in the Forties with Road to Singapore, followed by a stream of films including Holiday Inn (1942), singing "White Christmas."

The advent of sophisticated microphones helped Bing sing. He didn't have to bellow his voice so that the audiences in the back of the theater could hear him - like his idol Al Jolson did.

Bing's lifelong friend, Spokane dentist Herb Rotchford, had a home on Hayden Lake and Bing would often visit. He loved the golf and the fishing. "He liked it so much, he had my father buy him a house on the lake and a Chris-Craft boat, sight unseen," Herb Jr. said.

In his autobiography Call Me Lucky, Bing called Hayden Lake an "oasis of enjoyment in a hurly-burly world." In 1930, Bing married Dixie Lee an 18-year-old actress whose real name was Wilma Winifred Wyatt, mother of Bing's four sons: Gary, twins Philip and Dennis and Lindsay.

There are probably dark pockets in everyone's life - including celebrities like Bing - but LIFE Magazine called him "incontestably the No. 1 Big Family Man of Hollywood," and others said he was "Hollywood's Most Typical Father." But was he?

His eldest son Gary didn't think so, remembering in his book Going My Own Way, "I dropped my pants, pulled down my under-shorts and bent over. Then he went at it with the belt dotted with metal studs he kept reserved for the occasion. Quite dispassionately, without the least display of emotion or loss of self-control, he whacked away until he drew the first drop of blood, and then he stopped. It normally took between 12 and 15 strokes."

However, People Magazine reported that Bing's boys were hardly paragons of virtue - possibly needing a little discipline: "That his four sons became notorious for drinking and squabbling scarcely tainted Bing's image; instead, he became the object of public sympathy, the good father afflicted with unruly and sometimes ungrateful children."

Gary noted how different his father was compared to the role he played as the kindly and wise Father O'Malley in the movie Going My Way that earned him an Academy Award.

Dixie also supported her husband's rigid discipline over the boys. Behind the curtain at the Crosby household it was far from the loving image that Bing projected. "It was a house of terror all the time," according to Gary, who described it as a household headed by an icy, dictatorial father, a lonely alcoholic mother and four boisterous, tormented boys.

Philip denied the charges, calling Gary a liar, but Dennis and Lindsay confirmed the abuse. Nevertheless, Lindsay charitably said, "I don't know of many fathers who gave more consideration to their children."

Family squabbles aside, Bing Crosby had a triumphant career.

During World War II, he exemplified The Greatest Generation by entertaining the troops fighting in Europe.

It must have been heart-wrenching for Bing playing the part of an alcoholic has-been in The Country Girl (1954), costarring Grace Kelly, when the bottle constantly had tormented the Crosby family. Bing controlled his drinking, but Dixie couldn't. In 1952, alcohol and ovarian cancer sadly took her life at age 40.

Then Bing pursued actresses Inger Stevens and Grace Kelly before marrying actress Kathryn Grant in 1957. They had three children - sons Harry Lillis III and Nathaniel, and daughter Mary, who is remembered as playing the character who shot JR in the popular Dallas television series.

In his lifetime, he made 79 movies and sang an incredible 396 chart singles, with 43 No. 1 hits - White Christmas three times.

On Oct. 14, 1977, Bing and his golfing pals walked away from the 18th hole at a Madrid golf course and he said, "That was a great game of golf, fellas." Moments later he suffered a massive heart attack.

Along with all the glory, awards, triumphs and tears, Bing Crosby will always be remembered as the affable, easy-going crooner with the blue eyes and the mellow voice.

Bob Hope outlived his old pal Bing by 28 years. When Bob died in 2003 at age 100, the world had lost two of the towering entertainment icons of the 20th century. Bing's White Christmas and Jingle Bells will still be heard every Christmas, and Bob Hope will always be in the hearts of military veterans for all his road shows in six wars - bringing smiles to grateful GI Joes taking a break from death and destruction.

It's not hard to imagine Bing and Bob making just one more movie together - Road to Heaven. 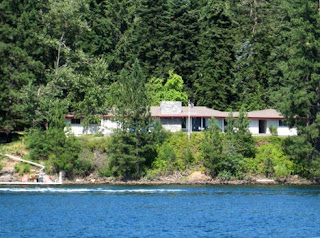 SOURCE
Posted by David Lobosco at 7:26 AM