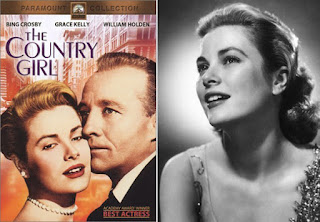 Grace Kelly won an Academy Award for her role as Georgie Elgin, wife of an alcoholic, played by Bing Crosby, in 1954’s “The Country Girl.”

She was cast against type as long-suffering wife wearing spectacles and dowdy cardigans, and some doubted whether she could pull off the role. Yet her performance earned her an Oscar against Judy Garland in “A Star Is Born” and Dorothy Dandridge in “Carmen Jones.”

What did people have to say about Kelly’s iconic role?

1. “ ‘The Country Girl’ comes along fitly as one of the fine and forceful pictures of the year,” a New York Times review said in December 1954.

2. Not everyone was so complimentary. Bushy-browed wise-cracker Groucho Marx called Kelly’s Oscar win over Garland “the worst highway robbery since Brink’s,” according to the New York Daily News.

3. Kelly herself told her biographer, “High Society” author Donald Spoto, that Bing Crosby was not thrilled about her being cast in the role: “He almost withdrew from the picture when he heard that I was going to play the part,” the Independent quoted her. The actress said Crosby told producers she was “too pretty” for the role of a frumpy wife.

4. But Kelly said Crosby changed his mind when he saw her drab wardrobe: “She was to play a woman who had been married for 10 years and has lost interest in clothes, herself – everything,” Paramount’s costumier Edith Head said of the character in The Independent.

5. The movie may have given Kelly a little more grit. “Prior to her nomination, she was known as a Hitchcock blonde,” author Bronwyn Cosgrave wrote in the book Made for Each Other: Fashion and the Academy Awards (Bloomsbury, 2007).

6. For all of the heat the Oscar contest drew that year, some of the best quotes came from the movie itself:

Bernie Dodd (played by William Holden): “Does your wife really want you to play this part?

Frank Elgin (played by Crosby, Kelly’s on-screen husband): “Yeah, she’s all for it.”

Bernie Dodd: “I was just wondering. The day I met her, she seemed a little difficult about terms and rather domineering, I thought.”

Bernie Dodd: “Oh, I know, I know. They all start out as Juliets and wind up as Lady Macbeths.”

7. “The de-glamorized Grace Kelly, dressed matronly in frumpy garb, won Best Actress for playing the long-suffering wife, in a performance that I believe she was not suited for and left me scratching my head to wonder what the Academy saw that I didn't (she never got inside the intense angst of her character),” wrote reviewer Dennis Schwartz.

SOURCE
Posted by David Lobosco at 7:32 AM