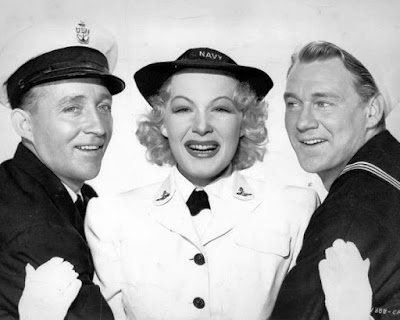 Bosley Crowther of The New York Times wrote a very favorable review of Here Comes The Waves on December 28, 1944:

"Paramount and its favored son, Bing Crosby aren't going precisely the same way that they went in Mr. Crosby's last picture—and everyone knows which way that was—but they are taking an agreeable turn together in "Here Come the Waves," which trooped into the Paramount yesterday. They are ambling along that vein of comedy, with vamped-in music, that Mr. Crosby used to rove, and they have Sonny Tufts and Betty Hutton as convivial companions this time. Sure, the traveling is nothing like as charming as it was on that last prize-winning tour, but it offers a few attractive vistas and several gaily amusing jolts. 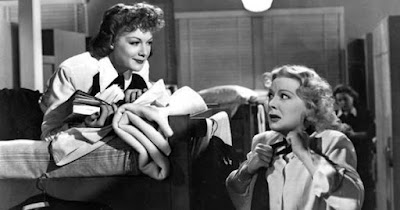 There are several scenes in the picture of Waves in training which are atmospherically good, and the settings contrived for the Wave show are well above regulation grade. Paramount, in short, has been generous to the service in every respect. But the humor is the best part of the picture—and the best part of the humor is that which has Bing crooning in travesty of a famous "swooner" who shall be nameless (just this once)”

A Variety review from December 20, 1944 was favorable as well:

"A kinda corny title, “Here Come the Waves” manages to surmount the handle and emerges as a tiptop film. Interspersed in Crosby’s nifty song logy, Johnny Mercer-Harold Arlen have supplied a set of excellent songs, including a dandy novelty in “Accent-Tchu-ate the Positive”; two corking ballads in “Let’s Take the Long Way Home” and “I Promise You,” the latter as a duet with Betty Hutton playing the alter ego...‘Old Black Magic’ is reprised in a delicious rib on Frank Sinatra. Crosby is cast as the new pash crooner, and his mike-clutching stance, accented by the whinnying dames, leaves no secret as to whom Der Bingle refers. It’s a dandy take-off on The Voice, but it’s not harsh; in fact, it’s a sympathetic salve for all out-of-service crooners..." 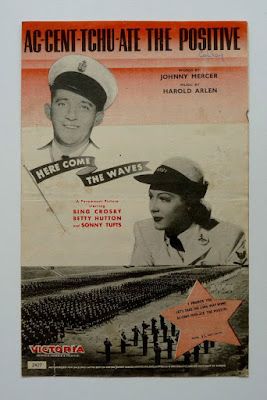 Like I said earlier I am not sure about the pairing of Bing and Betty Hutton, but they were two very popular stars in 1944. Hutton does a good job playing twins, and when I was younger and first saw the film I thought they were two separate people. Sonny Tufts was a good foil for Bing, but in his other movies I have always found Sonny to be a bit wooden. However, I don’t want to dwell on the negative, because this is really a great Bing Crosby movie. I enjoy it for Bing and the music, and I also enjoy it for how it shows how life was like during the war years. Yes, this is not a war movie on the lines of Back To Bataan or Destination Toyko, but Here Comes The Waves could be considered a little biographical in a way. It shows the emergence of the bobby soxer crazy, and it also shows a famous people who wants to do his part for the war effort, which is what Bing wanted to do. The film admittedly contains more than its share of enthusiastic flag waving, but it is a clever spoof of what life was supposed to be like for a popular crooning idol.

I have been starting to show my two younger children Bing Crosby movies, and I was going to show them this film, but my son said to me “I’m just not ready to see a black and white movie yet”, so I showed them High Society to them. This movie is on my list of Bing films I want to show them though. Like I said, Here Comes The Waves is not a 100% accurate portrayal of the war, but it is accurate at showing the amount of patriotism the country and the war had in 1944 as it fought the evil powers that were threatening the world. If you have not seen this movie in awhile, do yourself a favor and give the film a viewing. You may find yourself humming and dancing to songs that are over 70 years old, or it may just inspire you to join the navy... 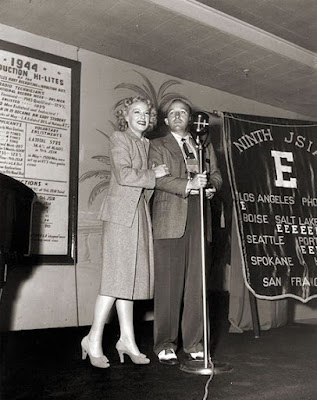