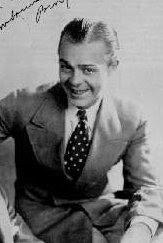 The Rhythm Boys was a vocal trio that was far ahead of its time. For the few years the group was in existance, the Rhythm Boys were a very popular feature of the Paul Whiteman Orchestra. There were three members of the trio - with the most famous member being Bing Crosby, of course. However there were two other talented members. One was Al Rinker, who was the brother of blues singer Mildred Bailey, and Harry Barris. Barris was a gifted and talented song writer, who unfortunately faded into obsecurity with the passages of time.

Harry Barris was born in New York City on November 24, 1905. Barris was a professional pianist at 14 and touring with his own group by 17. In 1926 Paul Whiteman, at the suggestion of his violinist Matty Malneck, hired Barris to join the vocal duo of Bing Crosby and Al Rinker, and the Rhythm Boys were born. For the next three years they were featured with Whiteman’s band, which included legendary cornetist Bix Beiderbecke. Bix was prominently featured along with the Rhythm Boys on Whiteman’s successful 1928 recording of Barris’ “Mississippi Mud”. A 1930 feature film on Whiteman and his band, the King of Jazz, was the first film appearance for Crosby and the Rhythm Boys.

In May 1930 the trio joined Gus Arnheim’s popular orchestra, appearing with the group at the prestigious Cocoanut Grove in Los Angeles. It was with Arnheim’s band that Crosby had his first big hit as a soloist, in 1931, with the Barris/Gordon Clifford composition “I Surrender Dear.”

When Bing left to pursue a solo career, Barris married Arnheim vocalist Loyce Whiteman (Paul Whiteman's daughter), and the two toured as a duo. Barris continued to work with a number of bands, but he had developed a drinking problem which caused him to curtail his composing in 1935. Partly due to Crosby’s help, he appeared in small roles in dozens of films, often without credit, as a musician or bandleader, and he entertained troops during WWII along with comedian Joe E. Brown.

Barris wrote a number of early hits for Crosby, including “Wrap Your Troubles in Dreams” with lyrics by Ted Koehler and Billy Moll and recorded by Bing in 1931. 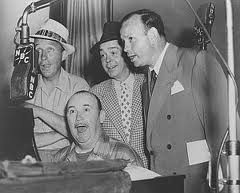 In 1943, after a hiatus of 13 years, The Rhythm Boys were reunited for the last time on the radio program Paul Whiteman Presents.

Barris appeared in 57 films between 1931 and 1950, usually as a band member, pianist and/or singer. In The Lost Weekend (1945), he is the nightclub pianist who humiliates Ray Milland by singing "Somebody Stole My Purse". An unusual change of pace for Barris was his comedy role in The Fleet's In (1942), as a runty sailor named Pee Wee who perpetrates malapropisms in a surprisingly deep voice. Many of the roles Barris had were in Bing movies such as "Birth Of The Blues" (1941),"Holiday Inn" (1942), and "Here Comes The Waves" (1945). 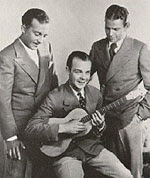 Offscreen, Barris successfully composed songs including "Mississippi Mud", "I Surrender, Dear", and "Wrap Your Troubles in Dreams". However, alcohol took over Barris' life in the 1950s. After three failed marriages and even more failed business ventures, Harry died virtually a pauper on December 13, 1962 at the age of 57.

Barris was the uncle of game show host and producer Chuck Barris who, among other things, not only co-created and hosted The Gong Show in the second half of the 1970's but was also the subject of the George Clooney film Confessions of a Dangerous Mind.

Posted by David Lobosco at 9:49 AM